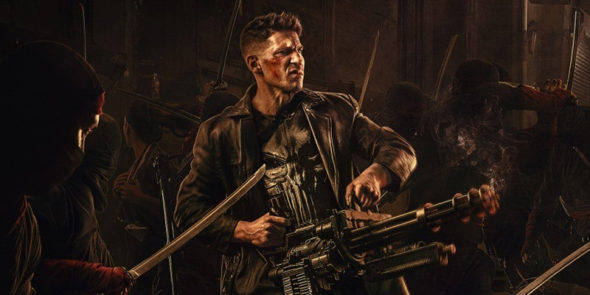 Sad news for fans of Marvel’s The Punisher. Deadline reports Netflix has cancelled the TV show after two seasons.

A spin-off of Marvel’s Daredevil, the drama follows The Punisher (Jon Bernthal) as he exacts revenge on those who killed his family and uncovers a conspiracy that runs far deeper than New York’s criminal underworld. The cast also includes Ebon Moss-Bachrach, Deborah Ann Woll, Ben Barnes, Amber Rose Revah, and Michael Nathanson.

Netflix did not give an explicit reason for cancelling Marvel’s The Punisher but it does seem the streaming service is parting ways with Marvel. Alongside The Punisher, Netflix is also ending one of their most popular Marvel series, Jessica Jones.

See star Jon Bernthal’s reaction to the cancellation below:

What do you think? Have you seen Marvel’s The Punisher? Are you sad it’s been cancelled?

So sad, greed is not good!

We knew all These Marvel Netflix shows would be cancelled. Disney is pulling their Property off of Netflix. Letting the Contracts run out. Finally they announced these cancellations.

I am so disappointed that the show is being cancelled . It’s one of the best things on T.V . Frank , and the whole cast fit together so we’ll . Whatever they replace it with , won’t be able to to come close to the fine program that their removing . I truly hope that another network will appreciate the quality .

No one is surprised