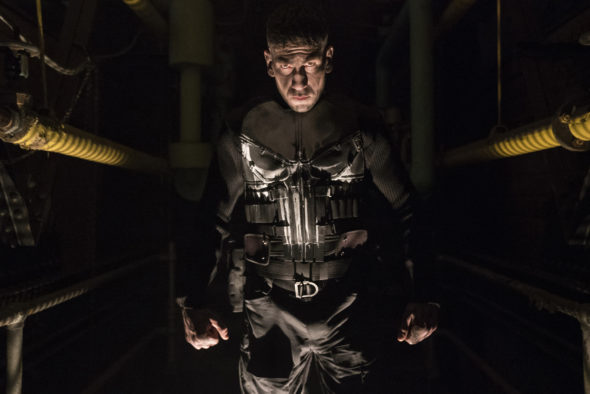 TV show description:
From Marvel Comics, Marvel’s The Punisher TV show centers on Frank Castle (Bernthal). After his wife and children are killed, Frank seeks revenge. Unlike others in the Marvel Cinematic Universe (MCU), he is not possessed of superpowers and is fueled only by his grief and anger.

Although he wears neither cape nor mask, this vigilante is known throughout New York City only as “The Punisher.” Now, Frank is out to uncover a vast conspiracy that stretches far beyond the criminal network in the Big Apple.

As Matt Murdoch (Charlie Cox) aka Daredevil’s one-time assistant, New York Bulletin reporter Karen Page (Woll) has her own dark past and a soft spot for Frank. Although Karen certainly does not approve of everything Frank does, she understands this complicated man. While he can always turn to her, Karen is not afraid to ask him where and when his vengeance crusade will end.

A former NSA analyst who is presumed dead, David Lieberman aka Micro (Moss-Bachrach) has long searched for Frank Castle. Since they have enemies in common, Micro hopes Frank can help him return to his family.

While thinking her husband dead, Sara Lieberman (Newman) is doing her best to raise their children on her own. The Liebermans’ plight affects Frank more deeply than he expects, and he realizes he must do battle for their family.

Seasoned and smooth, Dinah Madani (Revah) is a tried and true patriot who works as a Homeland Security agent. After returning from Afghanistan, she is assigned to partner with Sam Stein (Nathanson). Underneath his dark humor, Sam is a deeply ethical man.

Then there’s Billy Russo (Barnes). Billy and Frank were best friends, when they served together in the Special forces. When the series kicks off, Billy is amongst those who believes Frank is dead. Once he returned to the states from Kandahar, Billy established Anvil, a private military firm.

As one of his friends, Curtis Hoyle (Moore) is one of the few people who knows Frank Castle is alive. Curtis may understand him better than anyone, including Frank, himself.

Finally, there is William Rawlins (Schulze). After rising through the ranks, Rawlins is now a high ranking CIA officer. He is always playing the long game and is often ready to make difficult choices others can’t.

What do you think? Do you like the Marvel’s The Punisher TV series? Should this TV show have been cancelled or renewed for a third season on Netflix?

LOVE this show!! We’re so sad to see this, Jessica Jones and Daredevil cancelled.

New series should work with FX.

Please bring back the punisher…great show, finally something worth watching. Great actors, all fit well in each character!!! My husband and I love this show…. PLEASE BRING IT BACK!!

Please bring back The punisher, everyone loves a hero!

Just watched both series love it!! Hate that it was cancelled.

You’re absolutely CRAZY to stop this show.
Everyone I talk to about this show loves it and can’t get enough.
If I had the money I’d buy the rights to this show. After I make my first billion I’m going to buy your company and fire anyone that had anything to do with cancelling it.
I advise rechecking your data and get back to shooting more episodes or be looking for a new job.

I am not a marvel fan but I LOVE this show. I can binge watch the series and stay awake through the whole thing. I have also watched daredevil and love how they go together. I can’t understand why all the good shows get canceled. This really pisses me off.

I love this show. I hope season 3 has more of Karen and Frank. The pairing is perfect. They are one of the main reasons I watch. Franks always fun, but it is nice to see the side of him only she can bring out.

Keep pushing the boundaries that’s what makes you different and exciting keeps a high-tension anticipation of Frank’s next move so much so that I get depressed when the credits start to roll. Great cast Jon is the”Punisher” Great acting

Love this serie, it has great potential. It’s just time to spice it up, add some more interesting crossovers and others timelines with for instance The Ghostrider, Agents of Shield, Spiderman, The Defenders (or a least Daredevil or Luke Cage), Avengers Infinity time line, etc…
This show is awesome but can’t hold everything on Jhon Bernthal charismatic actuation and 2d season is a bit disapointing beacause of that.

Hope S3 will explode everything up!

Love this serie, it has great potential. It’s just time to spice it up, add some more interesting crossovers and others timelines with for instance The Ghostrider, Agents of Shield, Spiderman, The Defenders (or a least Daredevil or Luke Cage), Avengers Infinity time line, etc…
This show is awesome but can’t hold everything on Jhon Bernthal charismatic actuation and 2d season is a bit disapointing beacause of that.

Hope S3 will explode everything up!

I’m up to episode 11 and whilst, based upon rather too many of the Marvel TV series offerings so far. I expected much of the same meh, I am rather enjoying this one that has a good,solid storyline with many individual stories entwined within it.

However, please stop with the 13 episode runs as it will actually put the superstitious off and even this one could quite possibly have been condensed into a more easily binge watch of 10.

I couldn’t stop watching, or even to look away from the screen. Jon Bernthal is such a great actor, and Ebon Moss-Bachrach makes a very impressive mark in this series. I cannot wait for seasons 2,3,4, & hopefully many more. As soon as I finish episode 13, I will be watching the series all over again.

Fletch, I agree great series. Hope there are many more

Please bring back Punisher, new to Netflix and love this series.