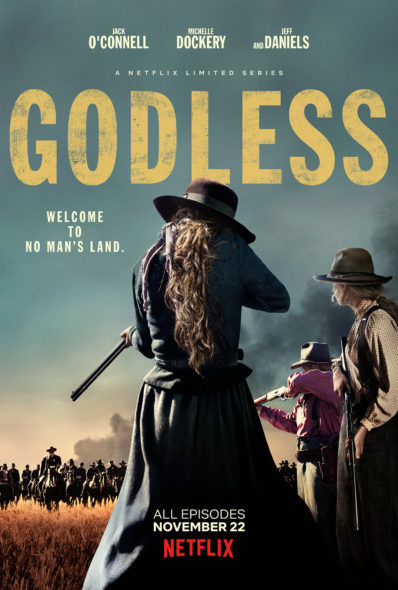 How well do the women of La Belle hold off the Frank Griffin gang during the first season of the Godless TV show on Netflix? Usually, the Nielsen ratings play a big role in determining whether TV shows are cancelled or renewed. Netflix and other streaming services, however, collect their own data. If you’ve been watching this TV series, we’d love to know how you feel about the Godless season one episodes. We invite you to rate them for us here.

A Netflix 19th century western, Godless stars Jeff Daniels, Jack O’Connell, Michelle Dockery, Scoot McNairy, Thomas Brodie-Sangster, Merritt Wever, Jeremy Bobb, Whitney Able, and Samantha Soule. From creators Scott Frank and Steven Soderbergh, Godless centers on Roy Goode (O’Connell). After betraying his mentor, the infamous gangster Frank Griffin (Daniels), Roy must go on the run from him and his “brotherhood” of criminals. He seeks refuge at the ranch of the widow Alice Fletcher (Dockery), in La Belle, New Mexico, where women run the show. When the citizens learn Griffin and his gang are on their way, they unite to defend themselves against these notorious outlaws .

What do you think? Which season one episodes of the Godless TV series do you rate as heavenly, hellish, or somewhere between? Should Netflix have renewed Godless for a second season? Don’t forget to vote, and share your thoughts, below.