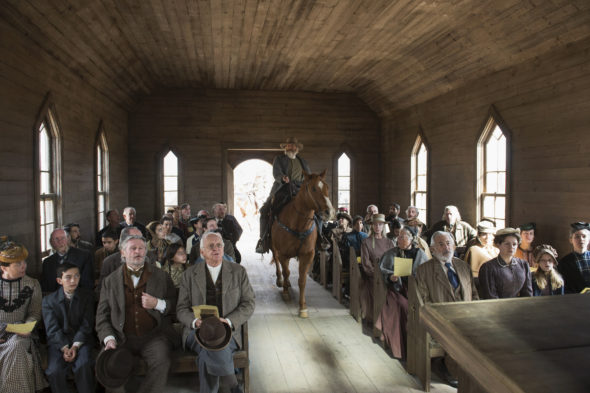 TV show description:
A 19th century western from creators Scott Frank and Steven Soderbergh, the Godless TV show centers on Roy Goode (O’Connell). After betraying his mentor, the infamous gangster Frank Griffin (Daniels), Roy must go on the run from him and his “brotherhood” of criminals.

Although he once viewed Roy as a son, Griffin and his crew are now hell-bent on revenge. On the lam, Roy seeks refuge at the La Belle, New Mexico ranch of the widow Alice Fletcher (Dockery).

A remote, rundown, frontier mining town, in La Belle, the ladies run the show. When they learn Griffin and his gang are on their way, they unite to defend themselves against these notorious outlaws.

What do you think? Do you like the Godless TV series? Should this Netflix TV show have ended or been renewed for a second season with new characters?

Love Love Love the story, and the way my children learned that keeping a clear head and knowing when to hold, and know when to fold them will let you see another day! We NEED Season 2

Godless SHOULD continue with a Season 2. It is an excellent show

Please do another season… love it

I absolutely loved this show! Great story! Great acting? The music and scenery were just heavenly.

This was a wonderful series. It had a great storyline, loved the setting, and plots each episode. Please bring it back.

This was the best series I have seen in a long time. The acting, storyline and scenery were phenomenal. Please, please RENEW!

Please renew, it closed without answers

We enjoy the show and think there should be more , Please!!

I think they should do a second season. I would love to see how California is for Roy- see him reunited with his brother. And even see a love bloom with him and Alice fletcher. Maybe he writes and eventually she joins him. Would love to see everyone’s futures; how Sherrif is living with being blind, how his sister is with her love, see men come to town and rebuild la Belle. So many different ways the story line could go

me too, there is still a lot to tell, have Alice and her son go to California, how will the black girl fit into the town and she will, see the men who will love these brave women, hopefully Sheriff does not go blind and just gets better glasses, just loved this show.

I would like to know about the painting of the Madam at the school house. My Friend has an original painting on silk, that is the same painting. It was painted by a relative. Any info would be greatful. ( Godless )

You need not renew it – it’s a finished piece. It is without doubt the finest piece of work I’ve seen on TV in the last 71 years!
That is not a typo. We got our first TV set in 1947!