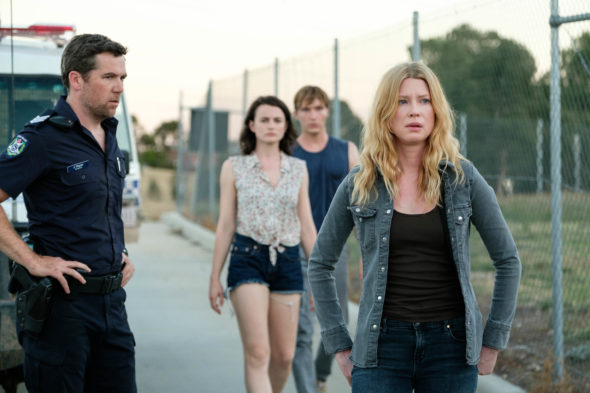 What will become of The Risen? Has the Glitch TV show been cancelled or renewed for a third season on Netflix? The television vulture is watching all the latest TV cancellation and renewal news, so this page is the place to track the status of Glitch, season three. Bookmark it, or subscribe for the latest updates. Remember, the television vulture is watching your shows. Are you?

Streaming on the Netflix paid subscription platform, Glitch stars Patrick Brammall, Genevieve O’Reilly, Emma Booth, Emily Barclay, Ned Dennehy, Sean Keenan, Hannah Monson, Aaron McGrath, Rodger Corser, Andrew McFarlane, Daniela Farinacci, John Leary, Luke Arnold, Rob Collins, and Pernilla August. The Australian paranormal drama centers on police sergeant James Hayes (Brammall). While answering a call at the local cemetery, James discovers several people have risen from the dead and are seemingly none the worse for the wear. Since they are all somehow connected, they need to figure out why The Risen have returned.

Because it is an Aussie TV series, its performance down under will have the largest impact on whether Glitch is cancelled or renewed for season three. Typically, Netflix only releases its viewership numbers in the course of promotion, so I don’t have much to go on, here. Flying blind, I’ll say that if ABC Australia renews Glitch for a third season, I expect Netflix will follow suit. For now, I’ll keep an eye on the trades and update this page with any breaking developments. Subscribe for free alerts on any Glitch cancellation or renewal news.

What do you think? Are you glad that the Glitch TV show has been renewed for a third season? How would you feel if Netflix had cancelled this TV series, instead?

One of the most fabulous, finest, funniest, flawlessly supernatural TV series I’ve ever watched. What with my being of the British Isles, I’m used to seeing high quality TV productions materialise from a wide variety of genres; into which, Glitch can be included. Painting from a palate of uniquely Austro-Aboriginal socio-economic and cultural mores, both scriptwriters and actors deftly apply flesh and bone on vignettes of those resurrected from their “familiar” graveyard sensoriums… places, where all sensual manifestation, is denied. Sensitively, written acted and directed, Glitch takes the viewer through a strained growth and maturation of Austro-Aboriginal culture reflected through… Read more »

Is Glich 3 still showing on Netflix? We cant find it.

Is there a 3rd season geeeeeeeeeez

So excited for a third season!

I dont think their will be a 3rd

Just started watching and I love it !!!

I am absolutely THRILLED!!!! I’ve been checking over and over and over online to see if we will ever see the 3rd season of glitch and had heard that it had been cancelled and was so disappointed. But now it’s sayinf it’s been renewed and that’s the best news!!! I love glitch! The storyline is amazing and the second season finale was such a cliffhanger that left so many questions unanswered. Please let this new season happen and don’t let this be a fake release.

Glitch has been renewed for Season 3. https://www.whats-on-netflix.com/news/glitch-season-3-renewed-2019-release/

Thanks for the note. We reported it earlier in the month but this page didn’t get updated.

Please do not cancel Glitch. We love this show.

It has been renewed.

I am hoping that the Powers that be will pass up the Cancel Key and bring back OA for another season.
One of the best shows this past season
Intensely entertaining and just hang onto your chair! Cmon Netflix keep it.

Well, I guess it would be kind of weird after 3-4 seasons…

This Show is Awesome! I would really like to see a Third Season of GLITCH!!
It is Awesome!! I’m American and I do hope that NETFLIX WILL bring it Back.

We’re really looking forward to a Season 3 of Glitch on Netflix. The acting is really good. I don’t even realize they’re acting, especially James. Who can we contact to let them know we’re interested?