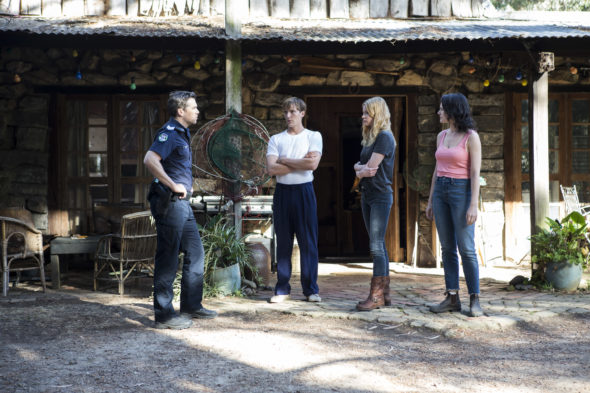 How much progress does James make on his investigation during the second season of the Glitch TV show on Netflix? Usually, the Nielsen ratings play a big role in determining whether TV shows are cancelled or renewed. Netflix and other streaming platforms, however, collect their own data. If you’ve been watching this TV series, we’d love to know how you feel about the Glitch season two episodes. We invite you to rate them for us here.

A Netflix paranormal drama, Glitch stars Patrick Brammall, Genevieve O’Reilly, Emma Booth, Emily Barclay, Ned Dennehy, Sean Keenan, Hannah Monson, Aaron McGrath, Rodger Corser, Andrew McFarlane, Daniela Farinacci, John Leary, Luke Arnold, Rob Collins, and Pernilla August. The Australian series centers on police sergeant James Hayes (Brammall). While answering a call at the local cemetery, James discovers several people have risen from the dead and are seemingly none the worse for the wear. Since they are all somehow connected, they need to figure out why The Risen have returned.

What do you think? Which season two episodes of the Glitch TV series do you rate as wonderful, terrible, or somewhere between? Should Netflix cancel or renew Glitch for a third season? Don’t forget to vote, and share your thoughts, below.

With all the uninteresting shows out there, it was great to come across this one. Right form Ep. 1 I was asking What is going on? and My wife and I found ourselves Binge watching seasons 1 and 2. Can’t wait for Season 3…. Please Keep it going this is Great T.V.

I didn’t know what to expect when I tuned in season #1…. but I was pleasantly surprised. This show is ground-breaking, and the writing and stars are excellent. Please don’t let it end.