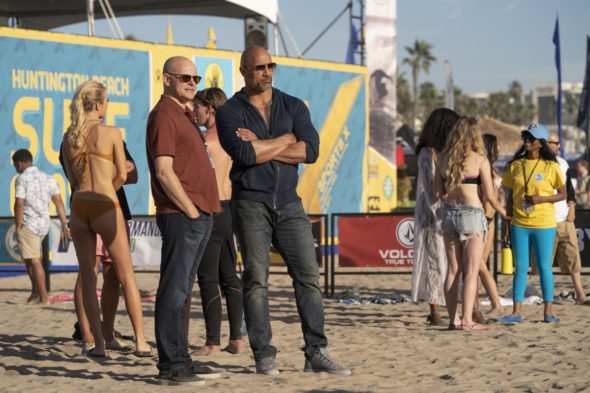 Does Dwayne “The Rock” Johnson still have a home on premium cable? Has the Ballers TV show been cancelled or renewed for a fifth season on HBO? The television vulture is watching all the latest cancellation and renewal news, so this page is the place to track the status of Ballers season five. Bookmark it, or subscribe for the latest updates. Remember, the television vulture is watching your shows. Are you?

An HBO comedy-drama, Ballers stars Dwayne Johnson, Rob Corddry, John David Washington, Omar Benson Miller, Donovan Carter, Troy Garity, London Brown, Jazmyn Simon and Brittany S. Hall. The series follows former superstar Spencer Strasmore (Johnson), who has re-invented himself as a financial adviser for both young phenoms and sports veterans. Spencer’s role in his clients’ lives far exceeds money management, as he struggles to help them navigate the many pitfalls that come with life in the spotlight. In season four, he and Joe (Corddry) head to Los Angeles, in hopes of capitalizing on the action sports market.

The fourth season of Ballers averaged a 0.34 rating in the 18-49 demographic and 835,000 viewers. Compared to season three, that’s down by 61% and 56%, respectively. Learn how Ballers stacks up against the other HBO TV shows.

Will HBO cancel or renew Ballers for season five? As expected, the ratings for Ballers are way down this season, because it’s no longer airing with Game of Thrones. Still, it’s doing well for the channel so, unless Johnson doesn’t want to make a fifth season, I believe Ballers will be renewed. For now, I’ll keep a hungry eye on the Nielsens and update this page with breaking developments. Subscribe for free Ballers cancellation or renewal alerts.

What do you think? Are you glad that the Ballers TV show has been renewed for season five? How would you feel if HBO had cancelled this TV series, instead?