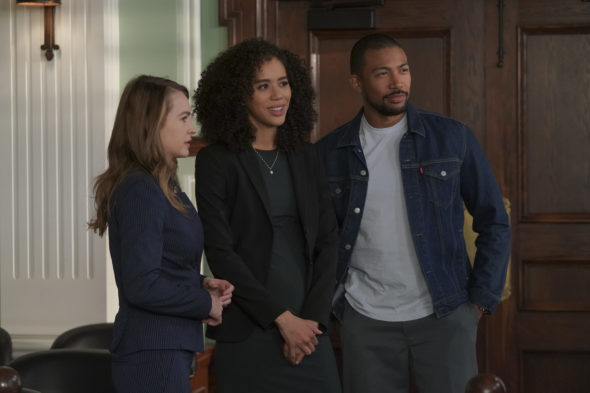 ABC has ruled against another TV series. The alphabet network has cancelled the For the People TV show. Co-star Ben Rappaport has confirmed that it won’t be returning for a third season.

A legal drama, For the People stars Britt Robertson, Jasmin Savoy Brown, Ben Rappaport, Susannah Flood, Wesam Keesh, Regé-Jean Page, Ben Shenkman, Hope Davis, Charles Michael Davis, Vondie Curtis-Hall, and Anna Deavere Smith. The Shondaland legal drama unfolds at “The Mother Court,” i.e. the United States District Court for the Southern District of New York. The ABC TV series centers on six young attorneys, who work on both sides of the law. Whether they represent the defense or the people, these lawyers ply their trade, trying some of the most publicized cases, and in federal court, the stakes can be sky high.

Airing on Thursday nights, the second season of For the People is averaging a 0.51 rating in the 18-49 demographic and 2.98 million viewers. Compared to season one, that’s down by 19% in the demo and up by 17% in viewership.

Here’s Rappaport’s confirmation of the cancellation:

What do you think? Do you enjoy the For the People TV show? Would you have watched season three of this ABC legal series?

For the People is one of the best shows I’ve seen. The stories, themes, monologues, the banter, the humor, the characters…I was devastated when I finished season 2. This is the only time I’ve searched to find out how to possibly encourage a show be brought back. And I’m a big TV watcher. The world needs this show.