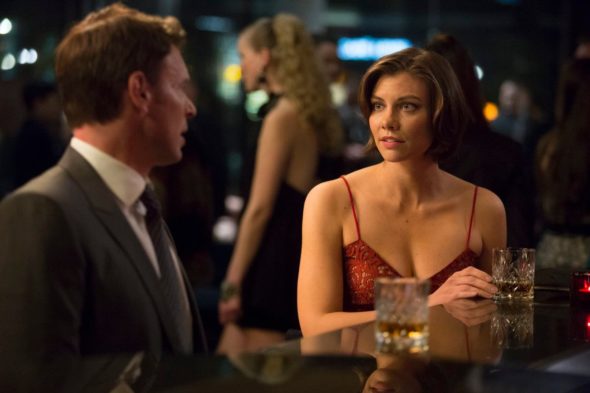 Are you watching any of ABC’s new series? The network just announced the spring 2019 finale schedule, which includes the season finales of freshman TV shows Whiskey Cavalier and The Fix.

While most of ABC‘s more highly rated series, like Grey’s Anatomy and The Conners, will return for the 2019-20 season, it’s unclear if lower-rated series like Whiskey Cavalier and For the People will be renewed. Will their upcoming season finales also be series finales?

Check out ABC’s full May 2019 finale schedule below:

The ABC Television Network has announced season finale dates for series ending their prime-time runs in May.

Following is a chronological listing (all times Eastern):

“The Goldbergs” (8:00-8:30 p.m.) – “Breakin'” – When Adam unintentionally lets it slip that Barry never completed his community service requirement, the brothers join together to throw the greatest breakdancing battle in the history of William Penn. Geoff’s stress levels are at an all-time high, so Erica makes an adult decision and plans for them to follow the Grateful Dead all summer. Finally, it’s the end of an era when the JTP (The Jenkintown Posse) graduates from high school on the season finale.

“Modern Family” (9:00-9:31 p.m.) – “A Year of Birthdays” – As the birth of Haley and Dylan’s twins approaches we take a look back at how each family member celebrated their birthdays this past year. Directed by Steve Levitan.

“Single Parents” (9:31-10:00 p.m.) – “Ketchup” – After learning that Angie’s ex, Derek (played by Adam Brody), lives near Space Camp, Will convinces Angie to confront him about leaving her when she was pregnant, which results in a rowdy and awkward encounter between the three of them. Meanwhile, Poppy internally struggles with who she truly has romantic feelings for.

“Shark Tank” (10:01-11:00 p.m.) – “1022” – First into the Tank are entrepreneurs from Fort Collins, Colorado, who present their fast food franchise focusing only on guilty pleasures. Entrepreneurs from Lexington, Kentucky, pitch their high design houses for special nocturnal guests. A husband and wife duo from San Diego, California, introduce their stylish product that keeps your pet safe from predators. Last into the Tank is a world-renowned jiu-jitsu instructor from Torrance, California, who solves a problem that we never knew we had with his dual fashion design.

“Grey’s Anatomy” (8:00-9:01 p.m.) – “Jump into the Fog” – Meredith Grey and the team of doctors at Grey Sloan Memorial are faced with life-or-death decisions on a daily basis. They seek comfort from one another, and, at times, more than just friendship. Together they discover that neither medicine nor relationships can be defined in black and white. Written by Krista Vernoff and directed by Debbie Allen.

“Station 19” (9:01-10:00 p.m.) – “Into The Wildfire” – The members of ‘Station 19’ pack their gear and head to Los Angeles, California, to help battle a deadly wildfire raging out of control. While the team works to evacuate residents, they meet Terry (played by Patrick Duffy), and Ben makes a split-second decision that changes both of their lives. Andy and Sullivan continue to explore their attraction to each other.

“For the People” (10:00-11:00 p.m.) – “A Choice Between Two Things” – On Election Day, Jay turns to Kate and the team for help after his parents and other voters are illegally intimidated at their polling place. Meanwhile, Roger and Jill’s relationship is at an impasse when Sandra learns that they are romantically involved and challenges Jill’s judgment. Elsewhere, Seth gets assigned to the case of a lifetime but his anxiety increases when he is appointed a bodyguard to help protect him, all while Sandra and Ted continue to tiptoe around their feelings for one another.

“American Idol” (8:00-11:00 p.m.) – “218 (Season Finale)” – Following a cross-country search for the next singing sensation, the iconic singing competition rounds out its second season on ABC. For the first time ever, America’s live coast-to-coast vote will determine the winner of “American Idol,” with all voting taking place during the show. The crowning moment will be preceded by special performances from music legends among other surprises.

“American Housewife” (8:00-8:30 p.m.) – “A Mom’s Parade” – The extraordinary musical episode includes four original songs by renowned composer Justin Paul (“The Greatest Showman,” “Dear Evan Hansen”) and Glenn Slater (“Tangled,” “School of Rock-The Musical”), as well as choreography from famed choreographer Ashley Wallen (“La La Land,” “The Greatest Showman”). Frustrated by the lack of appreciation for all she does, Katie decides to go “full Westport” and leaves the family to fend for themselves. Katie’s plan quickly backfires when the kids seem to be doing just fine, leaving Greg to suffer the brunt of her absence.

“The Kids Are Alright” (8:31-9:00 p.m.) – “Irish Goodbye” – Peggy struggles with Lawrence’s decision to move out of the house, especially after she discovers that he is secretly moving in with a girlfriend she’s never met. Lawrence’s determination to keep Peggy out of his personal life only causes her to investigate further while Mike sees his departure as good news. Meanwhile, Timmy can’t find his ventriloquist dummy, Knuckles, and learns that Joey took him without asking.

“black-ish” (9:00-9:30 p.m.) – “Relatively Grown Man” – After Junior gets an offer for his dream job working with Migos, Dre and Bow are determined to convince him to return to college and get his degree on the season finale. Directed by Anthony Anderson & Guest Starring Quavo.

“Bless This Mess” (9:30-10:00 p.m.) – “The Estonian Method” – Mike and Rio enter the “best hen” competition at the county fair with their prized chicken Priyanka in order to prove themselves to the community. Meanwhile, romantic sparks fly between Rudy and Constance, only to be halted by a run-in with someone from Rudy’s past, and Kay and Beau struggle with some marital issues.

“Whiskey Cavalier” (10:00-11:00 p.m.) – “Czech Mate” – Ollerman attempts to force the team to commit a terrorist attack for The Trust using Ray’s life as leverage. Meanwhile, Jai helps Standish deal with a revelation about his girlfriend, and Will and Frankie come to a realization about their relationship.”

What do you think? Which ABC shows do you watch? Do you think lower rated series like The Fix and For the People deserve another season?

You can cancel The Fix, Conners and Grey’s Anatomy but please don’t cancel Whiskey Cavalier. Love this show. Look forward to it every week..

Whiskey Caviler reminds me of Leverage. Light hummer with kicking ass of the bad guys.
The Fix is OK, but I hope they do some good twist and turns before the finale episode.
Networks tend to cancel shows with good potential, APB and Wisdom of the Crowd are two good examples. Two shows that had potential to evolve with time and good writers.

Enjoy For The People immensely and certainly hope it will be renewed.

I am not going to miss it. Foley was great as always but the female lead was just horrible and uninteresting. The rest of the supporting cast was not bad but a show like this can’t sucsed without two good main leads.

If you give whiskey a chance it may succeed. Castle did not do that we’ll coming out of the gate and it lasted 9 years

I LOVE whiskey caviler I’m tired of good shows getting canceled possibly and they keep garbage shows like the Conners/ Grey’s anatomy/ bachelor/. Dancing with the Stars trash. . Give this show a chance!!! We need more shows like this! This is a good family show. (Ala castle). We need a show to just get away from life for a hour. Abc will be nuts to get rid of a awesome show!

I am quite happy with Whiskey Cavalier. It is a light-hearted action show with romantic teasing and perfect off-set characters who play off one another precisely…love it. I also love For The People, more this season than last and I’m not sure why. I stopped watching How to Get Away With Murder because I couldn’t stand the kids anymore, but these young ones are likable even at their worst and the writing has been superb so far. The Fix I’m still not hooked on. I liked the first episode then felt it sort of went downhill a bit, so we’ll… Read more »

It’s not a mini-series but I can understand why you might think that. The current case will be solved in one season. If it’s renewed (which seems unlikely), most of the characters will return to take on a new case in season two.