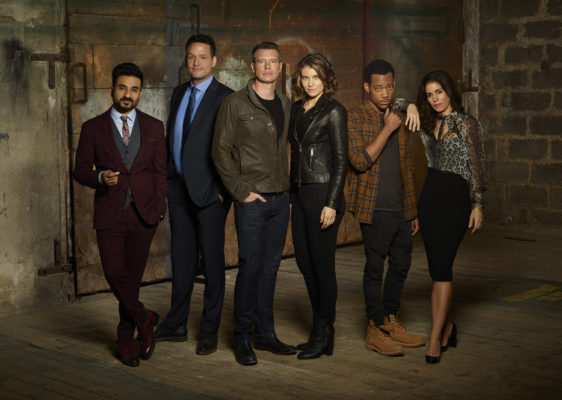 The series kicks off with Will still reeling from a breakup Gigi (Valerie Huber). She dumped him when he proposed to her, and since the entire incident was caught on camera, poor Whiskey has to relive it with not just his co-workers and friends, but his rivals and targets, as well.

While on assignment overseas, Whiskey crosses paths with Frankie, and the results are both explosive and captivating — largely because she ignites an explosion in order to cause a diversion and absconds with the target Will is supposed to bring in.

That target is Edgar Standish (Williams), a hacker extraordinaire who, in his work for the NSA, stumbled onto evidence of an enormous conspiracy involving corruption, election theft, and more. Since Edgar is a US citizen, the FBI has dibs on him, but Frankie means to take him to a CIA black-ops site, to get him to reveal the location of all the sensitive files in his possession.

Although both Will and Frankie are tough, seasoned agents, he has an open, tender side, whereas she prefers to stay out of touch with her feelings. Each one bests the other and saves the other at turns.

Sparring over custody of Edgar, Frankie and Will quickly develop a grudging respect for each other’s skills, as well as for Edgar’s determination to uncover the truth about vast government corruption. They’re soon assigned to work together on an inter-agency task force, to save the world.

The team also includes FBI profiler Susan Sampson (Ortiz), CIA gadget guru Jai Datta (Das), and FBI Agent Ray Prince (Hopkins). Together they’ll take on that task of saving the world and they just might save each other, too.

Series Finale:
Episode #13 — Czech Mate
Ollerman attempts to force the team to commit a terrorist attack for The Trust using Ray’s life as leverage. Meanwhile, Jai helps Standish deal with a revelation about Tina, and Will and Frankie come to a realization about their relationship.
First aired: May 22, 2019.

What do you think? Do you like the Whiskey Cavalier TV series? Should this ABC TV show have been cancelled or renewed for a second season?

Please bring this show back. It was so much better than half the crap that is on now.