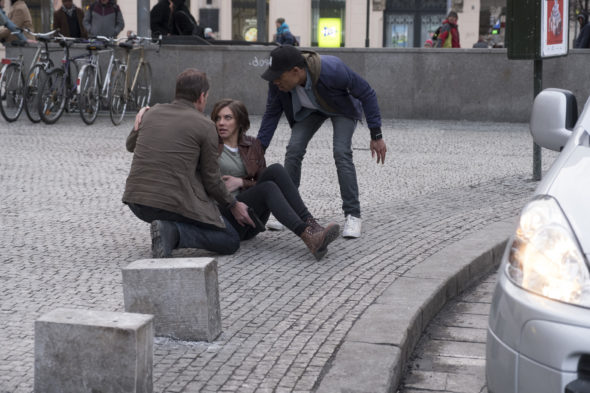 Will fans get another shot of Whiskey? Has the Whiskey Cavalier TV show been cancelled or renewed for a second season on ABC? The television vulture is watching all the latest cancellation and renewal news, so this page is the place to track the status of Whiskey Cavalier, season two. Bookmark it, or subscribe for the latest updates. Remember, the television vulture is watching your shows. Are you?

Will ABC cancel or renew Whiskey Cavalier for season two? The series premiered with mediocre numbers and have dropped much lower so I think this program will be cancelled. I’ll keep an eye on the ratings and update this page with breaking developments. Subscribe for free alerts on Whiskey Cavalier cancellation or renewal news.

5/12/19 update: Whiskey Cavalier has been cancelled so there won’t be a second season on ABC but the studio is shopping the series elsewhere.

5/23/19 update: There are discussions at ABC about possibly reversing the cancellation.

What do you think? Were you hoping that the Whiskey Cavalier TV show would be renewed for a second season? Are you sorry that ABC cancelled this TV series, instead?

Whiskey Cavalier was the best show I’ve seen come out in forever! I’m extremely disappointed in its cancelation. I want it back. It was smart, funny and the characters grew into their roles so much faster than I’ve seen in other series. I’m soo disappointed.

I hoping for Whiskey Cavalier ‘s return for. Season 2! It was refreshing and added plenty of excitement as well as friends, family, and love. Great cast!

OMG this is why I stopped looking at TV! This show was awesome! They Cancel good shows and keep the dumbest ones. That’s why everybody has Amazon Hulu or Netflix.

Please bring it back. I love that show

I love that show it was funny
Please bring it back