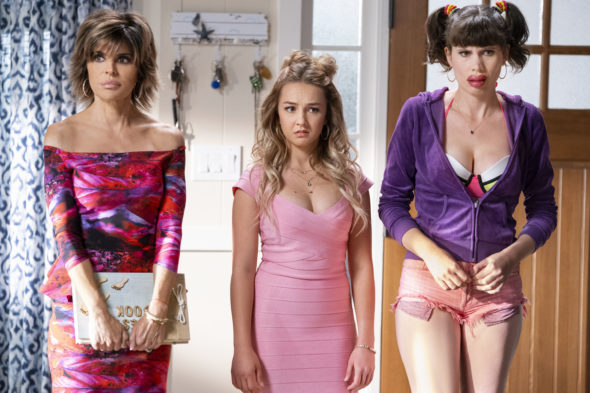 Are you enjoying your stay at the Bare Feet Retreat during the second season of The Guest Book TV show on TBS? As we all know, the Nielsen ratings typically play a big role in determining whether a TV show like The Guest Book is cancelled or renewed for season three. Unfortunately, most of us do not live in Nielsen households. Because many viewers feel frustration when their viewing habits and opinions aren’t considered, we’d like to offer you the chance to rate all of The Guest Book season two episodes here. *Status update below.

A TBS anthology sitcom, The Guest Book stars unfolds in a new town, at the Bare Feet Retreat in Mabel Beach, and features new series regulars Jimmy Tatro, Kimiko Glenn, and Dan Beirne, alongside returnees Carly Jibson and Eddie Steeples. The comedy centers on the guests who record their confessions, alibis, and farewells in the cottage’s guest book. This time around, they are hosted by town locals Bodhi (Tatro), Nikki (Glenn) and Tommy (Beirne).

What do you think? Which season two episodes of the The Guest Book TV series do you rate as wonderful, terrible, or somewhere between? Should TBS cancel or renew The Guest Book for a third season? Don’t forget to vote, and share your thoughts, below.

Loved season one. Laughed during every episode. Looked forward to season two. What a disappointment. Not the same. It wasn’t that funny at all. I hope there’s a third season but only if it’s more like season 1.

So far I am disappointed with season 2. I can’t believe it is by the same guy who was responsible for “My Name is Earl.”. “Earl” had a sweetness to it; a positive message. This season’s “Guest Book” is vulgar and depressing.