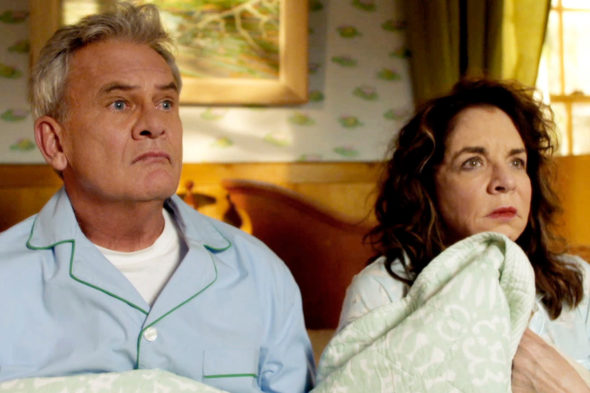 It’s a big day for fans of TBS. Today, the network announced they’ve renewed The Guest Book for a second season.

Since its debut in August, The Guest Book has been one of TBS’ higher-rated comedies. So far, season one is averaging a .40 rating in the 18-49 demo and 1.119 million viewers. The series’ season one finale is slated to premiere on September 28th at 10:30 p.m. ET/PT.

Absolutely can’t wait for this show to return! My hope for Season 2 is that there is no attempt to “go in another direction” or “draw in a more varied audience,” any of those phrases that signal the retooling of a great (and original) show into a boring formulaic series. It’s perfect as is. And the possibility of running out of good stories is nearly nonexistent. Still hunting for the second season premiere date but just knowing it’s coming makes me happy. (As opposed to the sad anger I feel whenever I forget that Roadies was canceled. For shame!)

I have been waiting for advertisements for this show…..not even a hint of a teaser. WHAT IS UP!

Love this show So funny.Please bring back.

i love this show! if you watched “earl” and “raising hope” this is your show.

A great, semi dark comedy with unexpected twists. The weekly stories of new guests plus the ongoing plot of the main characters keeps it fresh and interesting. Unbelievable what happens to some of these people on the show. Hilarious and off beat, this is a winner!

Garcia’s shows are always full of laughs. Can’t get enough of his smart, fun, feel good brand of comedy!

So glad The Guest Book has been picked up for another season! It’s such a funny show! Can’t wait for season 2!