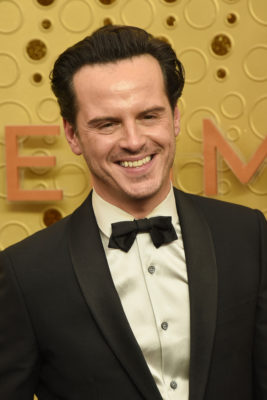 Based on the Tom Ripley novels by Patricia Highsmith, the drama follows Ripley, “a grifter scraping by in early 1960s New York, [who] is hired by a wealthy man to travel to Italy to try to convince his vagabond son to return home. Tom’s acceptance of the job is the first step into a complex life of deceit, fraud and murder.”

Scott will be playing the title role of Tom Ripley on Ripley. Showtime has not yet announced a premiere date, but you can read more info below:

In the series, Tom Ripley, a grifter scraping by in early 1960s New York, is hired by a wealthy man to travel to Italy to try to convince his vagabond son to return home. Tom’s acceptance of the job is the first step into a complex life of deceit, fraud and murder.

“We are so thrilled to have the supremely talented filmmaker, Steve Zaillian, adapt the singular saga of Tom Ripley from Patricia Highsmith’s novels as an ongoing series for SHOWTIME,” said Levine. “With Andrew Scott, whose charisma knows no bounds, inhabiting the iconic lead role, we feel confident that this will be a special one.”

Before his memorable performance in Fleabag as the Priest, Scott won the BAFTA Award for Best Supporting Actor for his portrayal of Moriarty in Sherlock and the British Film Independent Award for his work in CBS Films’ Pride. His other film and TV credits include His Dark Materials, Black Mirror, Spectre, King Lear, The Hour, Foyle’s War, John Adams, and Lennon Naked. Scott is also an Olivier Award-winning theatre actor. His most recent work in the United Kingdom includes Present Laughter at The Old Vic, Hamlet (for which he won the Critics Circle Award and was nominated for an Olivier Award and The Evening Standard Award) and Birdland.

Zaillian won Oscar, Golden Globe and BAFTA screenplay awards for Schindler’s List and was also nominated for all three honors for his work on Moneyball. He has received two other Oscar nominations, for Gangs of New York and Awakenings, as well as BAFTA noms for Gangs of New York and American Gangster. In addition, he received Emmy nominations in both writing and directing and won the DGA award for Outstanding Directorial Achievement for The Night Of, which he executive produced and which also received an Outstanding Limited Series nomination. Zaillian also directed and wrote the screenplays for A Civil Action and Searching for Bobby Fischer. His writing credits also include The Girl With the Dragon Tattoo, The Interpreter, Hannibal, Clear and Present Danger and The Falcon and the Snowman.

RIPLEY is co-produced by SHOWTIME and Endemol Shine North America in association with Entertainment 360 and FILMRIGHTS. Executive producers are Steven Zaillian, Garrett Basch, Guymon Casady, Ben Forkner, Sharon Levy and Philipp Keel of Diogenes. Scott will serve as a producer on the series.”

What do you think? Are you a fan of Andrew Scott? Will you watch Ripley?

I would watch Andrew Scott watching paint dry. Cannot WAIT for this series.

Love Andrew Scott. Love Highsmith novels. Please broadcast asap or give us a broadcast date to look forward to.