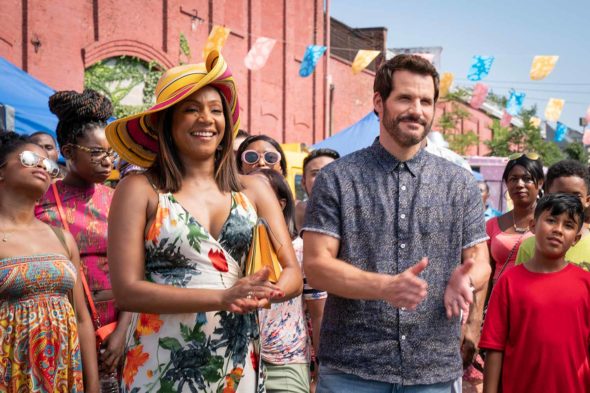 What’s on the menu for Tray? Has The Last OG TV show been cancelled or renewed for a third season on TBS? The television vulture is watching all the latest cancellation and renewal news, so this page is the place to track the status of The Last OG, season three. Bookmark it, or subscribe for the latest updates. Remember, the television vulture is watching your shows. Are you?

The second season of The Last OG averaged a 0.33 rating in the 18-49 demographic and 874,000 viewers. Compared to the first season, that’s down by 32% and 28%, respectively. Learn how The Last OG stacks up against other TBS TV shows.

Will TBS cancel or renew The Last OG for season three? While the ratings are way down, the comedy is still one of the channel’s highest-rated shows. I’m confident that it will be renewed. I’ll keep an eye on the Nielsen ratings and update this page as the season progresses. Subscribe for free alerts on any The Last OG cancellation or renewal news.

What do you think? Are you glad that The Last OG TV show has been renewed for a third season? How would you feel if TBS had cancelled this TV show, instead?

I love this show!! i think the cast producers etc are great!! also i just love it.. its so hard to find stuff i actually enjoy and relate to these days!!

I loved Season 1 and Season 2 of the last OG – I bought them on prime video…I feel like Session 3 is not very good – all of a sudden the show is so mild mannered – which I don’t think is realistic; I wasn’t too happy with the last episode, of Tray and Azad faking being a cancer patient…and wth happened to Bobby – Tray and Bobby are hilarious and as far as I’m concerned make the show. I also love Tray and Shay dynamic ❤️ I feel like it is trying to turn the show into some… Read more »

It should have been cancelled. The last og show is stupid and racist. In a world where people of every color are trying to come together, this sets a tone of hatred.

The **** hits reality ofln a lot of issues… Point out something deeper.. Because I grew up in the crack era…some of it isn’t great. And it won’t be unless you have walked down a bad path and want to better your self.. If you haven’t had to live around those things like this .maybe its over your head. No disrespect intended.not tht any of my opion matters…

So glad OG is on for another season ! Love the show. Makes me laugh and there are heart felt feelings as well. Great actors !

Love this show and the message is . Interracial family, second chances, trying to get to know his kids. Wish I could be on one show. I’ll do it for free. Being apart of something beautiful, hilarious, and a message in every show. 12 in my book

Love this show. Me and the kids. Love to see people with second chances and following they’re drea

I LOVE The Last OG!!! Best Comedy EVER!! Please don’t ever cancel it. Love the story and characters! Great entertainment!!! Love Tiffiny and Tracey!!

Funny, Funny,Funny! Everyone needs to check out this fantastic, original show. Love the cast and writing. Bring me more!!!!

I was excited to see the Last O.G. I must say it did not disappoint. The cast has great chemistry and the writing is refreshingly original. I’m so happy it’s gonna come back. Bring me some laughs please!

Can’t wait for S3! I really enjoyed the storyline, not so far-fetched in today’s world.