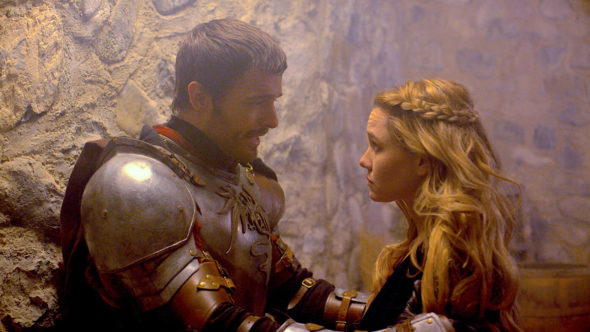 What do you think of Talon’s journey during the first season of The Outpost TV show on The CW? As we all know, the Nielsen ratings typically play a big role in determining whether a TV show like The Outpost is cancelled or renewed for season two. Unfortunately, most of us do not live in Nielsen households. Because many viewers feel frustration when their viewing habits and opinions aren’t considered, we’d like to offer you the chance to rate all of The Outpost season one episodes here.

A CW fantasy drama, The Outpost stars Jessica Green, Jake Stormoen, Anand Desai-Barochia, Imogen Waterhouse, Michael Flynn, Robyn Malcolm, Andrew Howard, and Philip Brodie. The supernatural TV series centers on Talon (Green), the lone survivor of the “Blackbloods” race. When she was still a child, a ruthless mercenary gang slaughtered her entire village. Now that she has come of age, Talon decides to track her family’s murderers, all the way to a harsh and unruly fortress, at the edge of civilization. Along the way, she discovers she has a mysterious power, but she has to learn to keep it in check, if she’s going to save herself and the world.

What do you think? Which season one episodes of The Outpost TV series do you rate as wonderful, terrible, or somewhere between? Should The CW cancel or renew The Outpost for a second season? Don’t forget to vote, and share your thoughts, below.

10/9/18 update: The CW has picked up a second season of The Output TV series. Details here.

WHEN DOES SEASON TWO START I AM IMPATIENTLY WAITING (:)

I got hooked from the start! Can’t wait for season 2!

The Outpost should go on to do a season 2 most definitely it is an awesome show. Jessica Green would also be a great actress to play Xena Warrior Princess in a remake of the show and Immy WaterHouse as Gabrielle.

They both have Chemistry in the Outpost and are great warrior women and strong female role models. Good actresses and these days that is rare to find.

I also love all of the malefactors in the outpost as well.

I LOVE The Outpost!!! I couldn’t wait for the next episode to come on. The story is getting SO INTERESTING. I REALLY REALLY REALLY REALLY HOPE TO SEE SEASON 2. Every time I start watching a show. It gets cancelled! EVERYTIME. So I hope this isn’t another disappointment “cancellation”!!

the Outpost was exciting in every episode and was eagely awaited every week, an excelent series. I only hope that it carries on as there seems so much more to come. It has ended with a lot more to be done. Please bring it back.

I loved the Outpost, Couldn’t wait for the next episode hope there is a second series as it is getting really exciting….

The Outpost. Something none of us can quite describe. But I will say one thing for it. Truly fabulous production. Absolutely phenomenal. I always hated the wait for the next episode. It was suspenseful, mysterious, and packed with romantic tension. I remember not being able to decide which two characters to ship, but I know now after watching that final episode. Talon and Janzo. I just can’t help myself. All in all, The Outpost is one of the most wonderful shows the CW has ever brought to the table. If they cancel it, we’re going to have some serious problems.… Read more »