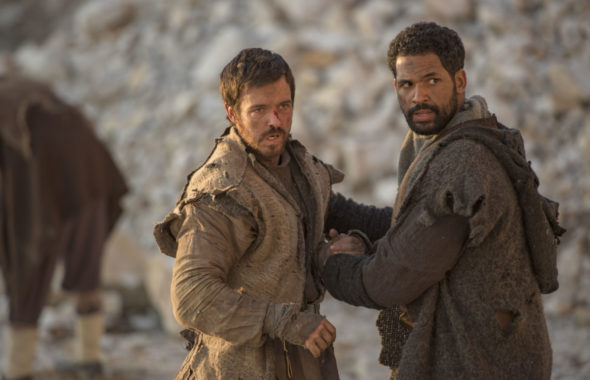 Can Talon discover the truth about her family and heritage? Has The Outpost TV show been cancelled or renewed for a fourth season on The CW? The television vulture is watching all the latest cancellation and renewal news, so this page is the place to track the status of The Outpost, season four. Bookmark it, or subscribe for the latest updates. Remember, the television vulture is watching your shows. Are you?

Airing on The CW television network, The Outpost stars Jessica Green, Jake Stormoen, Imogen Waterhouse, Anand Desai-Barochia, Aaron Fontaine, Adam Johnson, Izuka Hoyle, and Jaye Griffiths. The story centers on Talon (Green), the lone survivor of the “Blackbloods” race. When she was still a child, a ruthless mercenary gang slaughtered her entire village. Now that she has come of age, Talon has come into a mysterious power. In season three, Talon finds herself betrayed by her own kind, after summoning Zed and his Blackblood comrades to save the Outpost. She struggles to reconcile her human friends and her heritage.

The third season of The Outpost averaged a 0.06 rating in the 18-49 demographic and 387,000 viewers. Compared to season two, that’s down by 53% in the demo and down by 34% in viewership. Find out how The Outpost stacks up against other The CW TV shows.

Will The CW cancel or renew The Outpost for season four? Just prior to the third season premiere, the network ordered 13 more episodes. The CW has confirmed to us (as recently as late July 2021) that these additional episodes are part of the third season. However, the series’ showrunner and CW’s own video platform both refer to these as fourth season episodes. That would cause confusion if there was going to be an official fourth-season renewal coming. So, I suspect it’s already been decided that The Outpost will end with this extended third season. I’ll update this page with breaking developments. Subscribe for free alerts on The Outpost cancellation or renewal news.

What do you think? Were you hoping that The Outpost TV show would be renewed for a fourth season? Are you sorry that The CW cancelled this TV series, instead?

Why is all the television networks cancelling all the good shows?? All we have now are game shows, etc. I believe the I believe the networks are using game shows because they are cheap to be produced.

Very disappointed The Outpost was canceled!!! The show was getting better & better and then the rug pulled out from under us when it canceled!!!

I agree ! Loved the Outpost .

Would like to see a fourth fifth six and so on enjoyed it alot.

I am actually sad to see that The Outpost has been cancelled. I find the show to be a very creative and interesting fantasy world. Sure some of the acting and lines could improve but overall I love the show. I faithfully watched it every week. I will miss it for sure.

Im hoping for a new season as well.

I hope the outpost is not canceled. I really enjoy it it’s exciting and it’s something different. I’m in my 70s and still love it!

I think in this age of television now writers should stop the fluff and tell the story. Too many shows get cancelled partly because the audience gets bored with the story going so slow and ratings go down so it’s not making the money they expect. Blah, blah it all boils down to profits.

Season 4 begins July 15th. Season 3 is already complete. Season 1 has 10 episodes and seasons 2 and 3 both have 13 episodes. Season 3 won’t resume because it’s done.

I didn’t like the show initially, but it grew on me. It reminds me of the action/fantasy with humorous undertones that made Hercules and Xena so popular. I do hope it’s gets a “true” season 4 or “quasi” season 5.

One of the best shows on the CW! This show just keeps getting better and better. Of course,The Outpost must be renewed not just for one more but for a few seasons to come!
Love the way Jessica has really grown into her role. She does a great job as Talon. Also enjoy when she kicks some ass as Talon!!Great show!!!!!

Love the Outpost. I can’t wait for season 4. Keep up the great work team.

Renew for 4th please!If they were going to cancel the last season would have been good to end before the gods came back.When the Queen died and T alone took her spot.Just my opinion.

And we’re not going to see what the baby is . Is it going to be more black blood than white ? And the sex ? You left us hanging! Not good for the viewers like me n all Outpost fans ! You might want to reconsider your decision on the cancellation!

Just found the show The Outpost on CW and love it. I really hope it will be renewed for another season.