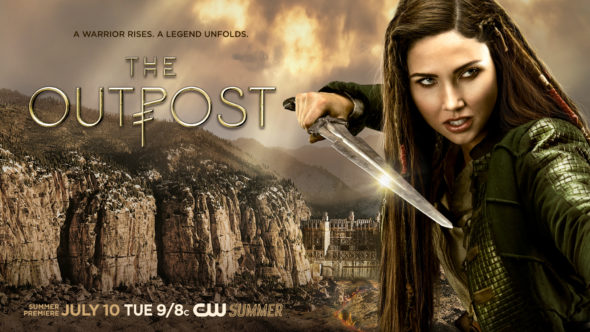 During the regular television season, The CW added four new TV series, but cancelled two of them. The Outpost TV show is the only new series coming to the littlest network, this summer. As a fantasy drama, will it be a better fit than Valor and Life Sentence? Does the network even have the same ratings expectations during the summer months? Will The Outpost be cancelled or renewed for season two? Stay tuned. *Status update below.

A CW supernatural drama from creators Jason Faller and Kynan Griffin, The Outpost stars Jessica Green, Jake Stormoen, Anand Desai-Barochia, Imogen Waterhouse, Michael Flynn, Robyn Malcolm, Andrew Howard, and Philip Brodie. The story centers on Talon (Green), the lone survivor of the “Blackbloods” race. When she was still a child, a ruthless mercenary gang slaughtered her entire village. Now that she has come of age, Talon decides to track her family’s murderers, all the way to a harsh and unruly fortress, at the edge of civilization. Along the way, she discovers she has a mysterious power, but she has to learn to keep it in check, if she’s going to save herself and the world.

10/3 update: You can see the latest night’s ratings in context.

What do you think? Do you like The Outpost TV series on The CW? Should it be cancelled or renewed for a second season?

*10/9/18 update: The CW has picked up a second season of The Output TV series. Details here.

I liked outposted it had adventure and kept you interested

I like the Outpost for its face paced plot. It is different in a pleasant way from Game of Thrones where you get second or third grade background plots running for 2 or 3 seasons but not in every episode, so it gets diluted to the point you loose interest in that plot. Outpost,on the other hand, has some interesting plots and brilliant fantasy ideas we just need to see continue. And it has some Witcher-ness in it, if you read the books or played the games you will see it. Hope screenwriters and directors come up with some brilliant… Read more »

I really like the Outpost, it’s original in a sea of remakes. I only watch on the internet so I dont know if my view is counted but it should.

I thoroughly enjoyed Outpost and hope that CW brings it back for a second season! There are enough crime, super hero and drama series on TV nowadays. This action/adventure series offers fans a much needed option in viewing! The plot is pleasantly different, the characters interesting and acting is very good!

Hey guys please please please!!! Don’t cancel the show. I wanna see more. The show has potential and i believe it gonna be awesome in the second season. Please dont cancel it

The show is renewed for season 2:)

omg i love the outpost please dont cancel it i and soo much more peole would love to see season 2 and so on. i myself wants to see how talon turns out and what happens between ganso and talon do they get together and also what happens. is the dregman a blackblood or what soooooo many more questions soo wish there will be a next season.

DON’T CANCEL THE OUTPOST. It’s a fun show that is reminiscent of Xena, Hercules etc… and just because it doesn’t have huge budget tech doesn’t mean it’s not worth continuing. It really is a good show. Not to mention I swear I will stab myself in the eye if the regular networks put out another stupid “scripted reality show” – BORING AND HATED THEM SINCE THEY BEGAN.

So the first few ep. We’re kinda goofy but it’s a fun show so I kept watching. Hoping it’d get better. I’m so glad I did. The story really filled out. It ended up being what I was hoping for. But I’m concerned because a lot of people seem to have given up on it after the first couple. I’m so tired of falling in love w a story only to never have any closure due to cancellation. Some shows need more than a few ep. To show their potential. I’ve got my fingers crossed for a 2nd season, but… Read more »

Love this show! I want more!

i love this show, please dont leave me hanging with episode 10 there has to bea second season

Outpost is brilliant plz make season 2 it should be aired on a more popular channel. Jason

Love this show!please renew for season 2 and more.

This show is great show. Jessica Green plays a mysterious character which keeps us all thinking about who she is and where her character will go.
Please do not cancel. Believe it or not I watch 100 for 5 seasons. This is a perfect replacement between seasons.

I, like most avid tv viewers, truly enjoy fantasy themed program originals. The Outpost is terrific. I believe it has definitely earned a chance for a second season appearance. Allow the faithful followers see where the season one finale takes use. Please do not leave us guessing like so many other networks do when they cancel a program with a cliffhanger. It tends to have us cancel that that network station altogether.
Thank You For Your Consideration,
Dean A. Crutchfield

i realy enjoyed the show