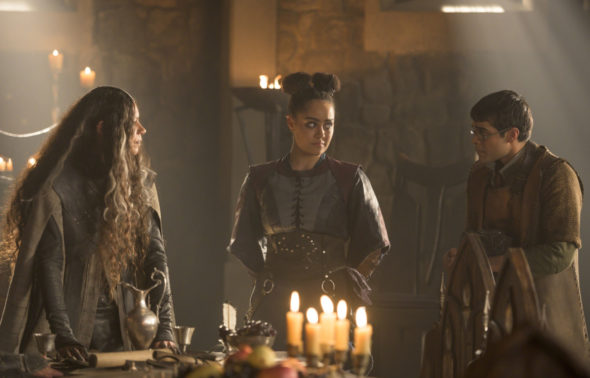 Can Talon put things right in the third season of The Outpost TV show on The CW? As we all know, the Nielsen ratings typically play a big role in determining whether a TV show like The Outpost is cancelled or renewed for season four. Unfortunately, most of us do not live in Nielsen households. Because many viewers feel frustrated when their viewing habits and opinions aren’t considered, we invite you to rate all of the third season episodes of The Outpost here. *Status Update Below.

A CW fantasy drama series, The Outpost stars Jessica Green, Jake Stormoen, Imogen Waterhouse, Anand Desai-Barochia, Aaron Fontaine, Adam Johnson, Izuka Hoyle, and Jaye Griffiths. The story centers on Talon (Green), the lone survivor of the “Blackbloods” race. When she was still a child, a ruthless mercenary gang slaughtered her entire village. Now that she has come of age, Talon has come into a mysterious power. In season three, Talon finds herself betrayed by her own kind, after summoning Zed and his Blackblood comrades to save the Outpost. She struggles to reconcile her human friends and her heritage.

What do you think? Which season three episodes of The Outpost TV series do you rate as wonderful, terrible, or somewhere between? Do you think that The Outpost should be cancelled or renewed for a fourth season on The CW? Don’t forget to vote, and share your thoughts, below.

Love this Series The Outpost, it reminds me of Xena the Warrior Princess because of humor it contained and the settings, they ended that series really bad after 6 seasons and left you hanging. But The Outpost has a good combination of humor, fighting scenes, fantasy, and characters. So yeah, I really hope they have a next season.

Don’t like seeing it placed so low in the CW lineup ratings.

Nielson ratings suck. I don’t know a single houshold that has a ratings box from them… Out of over 500 friend and business contacts. That makes it obvious to me that they are only given to a particular group of people who do not represent the average household at all.

Maybe we should all contact CW and let them know how stupid it is to rely on such a poor system representing only a small subset of homes?

Small network that they are, they look more at total viewers and streaming numbers than at demo.