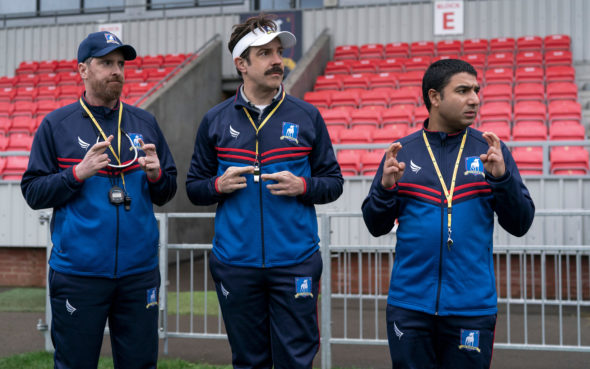 Can Ted turn things around in the second season of the Ted Lasso TV show on Apple TV+? As we all know, the Nielsen ratings typically play a big role in determining whether a TV show like Ted Lasso is cancelled or renewed for season three. Apple TV+ and other streaming platforms, however, collect their own data. If you’ve been watching this TV series, we’d love to know how you feel about the second season episodes of Ted Lasso here.

An Apple TV+ comedy, the Ted Lasso TV show stars Jason Sudeikis, Hannah Waddingham, Brendan Hunt, Jeremy Swift, Juno Temple, Brett Goldstein, Phil Dunster, Nick Mohammed, and Sarah Niles. The series revolves around Ted Lasso (Sudeikis), a small-time college football coach from Kansas. He’s hired to coach a professional British soccer team, despite having no experience coaching the sport. But what he lacks in knowledge, he makes up for with optimism, underdog determination, and biscuits. In season two, a sports psychologist has been brought in to work with AFC Richmond.

What do you think? Which season two episodes of the Ted Lasso TV series do you rate as wonderful, terrible, or somewhere between? Are you glad that Ted Lasso on Apple TV+ has been renewed for a third season? Don’t forget to vote, and share your thoughts, below.

I have thoroughly enjoyed the first two seasons of Ted Lasso and will be heart broken if there aren’t many more seasons of this brilliantly scripted, produced, and performed show! Please, may I have more?