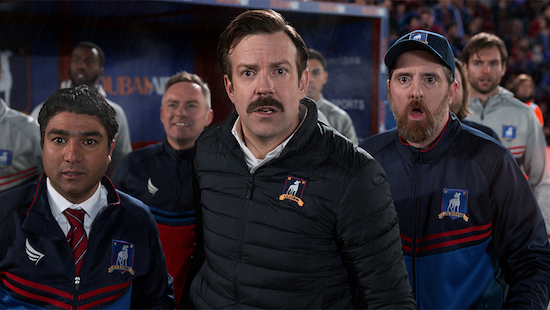 Ted is back in the game. Apple TV+ has announced that season two of the Ted Lasso TV show will debut on Friday, July 23rd.

The Apple TV+ show has already been renewed for a third season.

Here’s more information about the return of Ted Lasso, as well as a teaser trailer:

Apple today unveiled the premiere date and teaser trailer for the highly anticipated second season of comedy sensation “Ted Lasso,” which will make its global debut on Friday, July 23, 2021 on Apple TV+. The broadly acclaimed, hit series has already been renewed for a third season ahead of its season two premiere. “Ted Lasso” recently triumphed at the 2021 Critics Choice Awards sweeping every category it was nominated in and securing wins for Best Comedy Series, Best Actor for Jason Sudeikis and Best Supporting Actress for Hannah Waddingham.

Since its debut in August 2020, the beloved comedy has continued to be recognized with a multitude of awards and nominations, recently earning Jason Sudeikis a Screen Actors Guild Award for Outstanding Performance by a Male Actor in a Comedy Series and a Golden Globe Award in the Best Comedy Actor category. The series also landed two Writers Guild Awards for Best New Series and Best Comedy Series, nominations from the Producers Guild of America for Comedy Series, as well as honors from many other guild and critics groups. “Ted Lasso” was also the only comedy series honored as an AFI Program of the Year and has regularly appeared on television critics’ “Best of 2020” lists.

The complete first season of “Ted Lasso” is available on Apple TV+ on the Apple TV app.

Apple TV+ is home to award-winning Apple Originals from today’s most imaginative storytellers. Apple TV+ offers premium, compelling drama and comedy series, feature films, groundbreaking documentaries, and kids and family entertainment, and is available to watch across all your favorite screens. After its launch on November 1, 2019, Apple TV+ became the first all-original streaming service to launch around the world, and has premiered more original hits and received more award recognitions faster than any other streaming service.

Apple TV+ is available on the Apple TV app in over 100 countries and regions, on over 1 billion screens, including iPhone, iPad, Apple TV, iPod touch, Mac, select Samsung, LG, Sony and VIZIO smart TVs, Amazon Fire TV and Roku devices, Chromecast with Google TV, PlayStation and Xbox consoles, and at tv.apple.com, for $4.99 per month with a seven-day free trial. For a limited time, customers who purchase a new iPhone, iPad, Apple TV, Mac or iPod touch can enjoy one year of Apple TV+ for free. This special offer is good for three months after the first activation of the eligible device.1

What do you think? Have you enjoyed the first season of the Ted Lasso TV show? Will you be watching season two on Apple TV+?

Love the show. Looking forward to the season