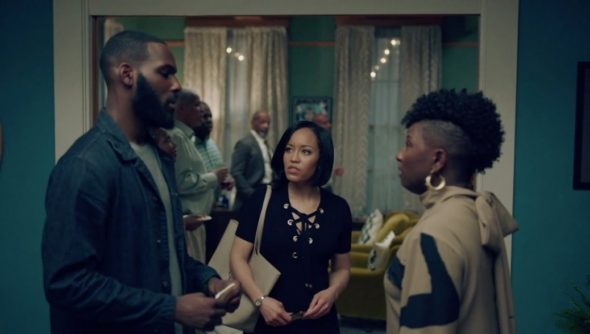 Will the siblings find happiness in the fifth season of the Queen Sugar TV show on OWN? As we all know, the Nielsen ratings typically play a big role in determining whether a TV show like Queen Sugar is cancelled or renewed for season six. Unfortunately, most of us do not live in Nielsen households. Because many viewers feel frustrated when their viewing habits and opinions aren’t considered, we invite you to rate all of the fifth season episodes of Queen Sugar here.

An OWN original drama from Ava DuVernay, Queen Sugar stars Dawn-Lyen Gardner, Nicholas Ashe, Rutina Wesley, Greg Vaughn, Kofi Siriboe, Ethan Hutchison, Bianca Lawson, Tina Lifford, Omar J. Dorsey, and Henry G. Sanders with Timon Kyle Durrett recurring. Based on the Natalie Baszile novel, the story unfolds in the fictional Louisiana town of Saint Josephine. It chronicles the lives and loves of the estranged Bordelon siblings who try to save the family sugarcane farm, after a family tragedy. In season five, Charley (Gardner) remains thick in the battle with the Landry family as she uses the system of local government to protect the community and the farmers who own land, while coming to terms with her son Micah (Ashe) as he navigates his freshman year at Xavier University, an HBCU. Nova (Wesley) launches her new website to support the community while moving out of the Ninth Ward and settles into her romantic relationship with Calvin (Vaughn). Ralph Angel (Siriboe) works to manage fatherhood with son Blue (Hutchison) and a healthy path forward with girlfriend Darla (Lawson) despite constant threats to his land and home.

What do you think? Which season five episodes of the Queen Sugar TV series do you rate as wonderful, terrible, or somewhere between? Are you glad that Queen Sugar has been renewed for a sixth season on OWN? Don’t forget to vote, and share your thoughts, below.