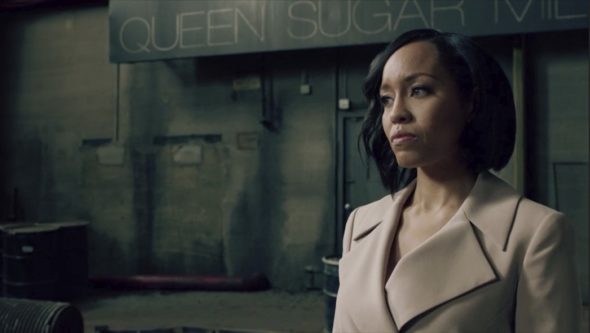 OWN may be saying goodbye to The Haves and the Have Nots TV series but Queen Sugar isn’t going anywhere. The cable channel has renewed Queen Sugar for a sixth season ahead of the drama’s fifth season premiere next month, on Tuesday, February 16th. It’s likely that season six will launch in 2022.

Season Five To Premiere Tuesday, February 16 at 8 pm ET/PT on OWN

LOS ANGELES – Ahead of the season five return, OWN: Oprah Winfrey Network has picked up season six of Ava DuVernay’s critically acclaimed drama series “Queen Sugar,” to air later in 2021. Season five premieres Tuesday, February 16 at 8 pm ET/PT on OWN. Produced by ARRAY Filmworks and Harpo Films in association with Warner Bros. Television, “Queen Sugar” has been lauded for its powerful portrayal of an African-American family in the Deep South and for DuVernay’s continued hiring of women directors. Season five was helmed entirely by three filmmakers, including producing director Lauren Wolkstein, Lisa France and Cierra Glaude.

During the production stop-down in 2020 due to COVID-19, DuVernay decided to completely revamp the season five storyline to address the very real issues our country was facing through the lens of the beloved Bordelon family and the fictional community of St. Josephine. DuVernay reconceived the character arcs and storylines, writing alongside returning showrunner Anthony Sparks and supervising producer Norman Vance to tackle head-on the COVID-19 pandemic, the Black Lives Matter protest movement that swept the country, and corruption in politics to showcase the specific impact and ramifications these issues have on communities and people of color. Through it all, viewers will see the joy around the pain, and humanity’s ability to persevere and find light in the darkest of times. Led by the talented cast of Rutina Wesley, Dawn-Lyen Gardner and Kofi Siriboe, “Queen Sugar’s” storylines continue to delve into important topics such as police brutality, addiction and recovery, and systemic racism, among many others.

“The way Ava creates space to allow these characters to embody real-world experiences is television at its finest and we are proud to continue this ground-breaking series,” said Oprah Winfrey, CEO, OWN. “I hear from so many people that they see themselves in the Bordelon family, and my hope is that through this kind of storytelling the hearts and minds of people are opened for a deeper understanding and empathy of one another.”

“When Ava came to us with the idea to revamp the storyline for the new season after production was halted due to the pandemic, we knew it was the right decision to give our viewers her unique perspective on the very real issues impacting their daily lives and the affect the demand for racial equality has had on the Black community and our society as a whole,” said Tina Perry, president, OWN. “We are proud to announce today the pickup of the show’s sixth season which will air later this year enabling us to further explore the compelling story of the Bordelon family. We are grateful to Ava, her creative team, the incredible cast and tireless crew for all the hard work they have put into the show.”

“What a joy and an honor to continue the stories of ‘Queen Sugar’ with our partners at OWN and Warner Bros.,” said DuVernay. “On behalf of every producer, editor, costumer, grip, writer, cast member and all departments involved in making this series, we’re delighted to delve into a sixth season and to bring our beautiful audience more of the Bordelon family.”

At the outset of production, beginning with production of the first season, DuVernay established an inclusive initiative to hire an all-female directorial team. Since its debut in September 2016, 37 women have directed episodes of “Queen Sugar,” 34 of whom made their television directorial debut on the series.

“Queen Sugar” was recently recognized by the Television Academy Honors for its powerful portrayal of an African-American family in the Deep South that sheds light on complex issues and challenges facing our society. The series has additionally been awarded the NAACP Image Award for Outstanding Drama Series, and for three consecutive years was named Best TV Show Drama by the African-American Film Critics Association (AAFCA) and nominated as Television Show of the Year by the American Black Film Festival (ABFF). “Queen Sugar” has averaged over two million total viewers throughout its series run. During its most-recent season (6/12-9/11/19), “Queen Sugar” placed among the top 3 scripted series across broadcast and cable with African-American Women, households and total viewers.

The first four seasons of “Queen Sugar” are available to stream exclusively on Hulu, making it possible for viewers to catch up on all past episodes.

About “Queen Sugar” Season Five
From award-winning filmmaker Ava DuVernay (16-time Emmy nominated “When They See Us” and romance anthology series “Cherish the Day” for OWN), the contemporary drama “Queen Sugar” features the Bordelon family who are fighting to save their family farm to preserve their father’s legacy while navigating their own personal journeys. In season five, Charley (Dawn-Lyen Gardner) remains thick in the battle with the Landry family as she uses the system of local government to protect the community and the farmers who own land, while coming to terms with her son Micah (Nicholas Ashe) as he navigates his freshman year at Xavier University, an HBCU. Nova (Rutina Wesley) launches her new website to support the community while moving out of the Ninth Ward and settles into her romantic relationship with Calvin (Greg Vaughn). Ralph Angel (Kofi Siriboe) works to manage fatherhood with son Blue (Ethan Hutchison) and a healthy path forward with girlfriend Darla (Bianca Lawson) despite constant threats to his land and home.

“Queen Sugar” is produced for OWN by ARRAY Filmworks and Harpo Films in association with Warner Bros. Television. The season five executive producers are Ava DuVernay, Oprah Winfrey, Paul Garnes and Anthony Sparks. The series is based on the book by Natalie Baszile.

About ARRAY
Founded in 2011 by filmmaker Ava DuVernay, ARRAY is a multi-platform arts and social impact collective dedicated to narrative change. The organization catalyzes its work through a quartet of mission-driven entities: the film distribution arm ARRAY Releasing, the content company ARRAY Filmworks, the programming and production hub ARRAY Creative Campus and the non-profit group ARRAY Alliance. www.arraynow.com

What a joy to continue QUEEN SUGAR with our partners at @OWN + Warner Bros. On behalf of every @ARRAYNow producer, costumer, editor, grip, writer, cast/crew member, we’re delighted to delve into our sixth season! And, we’ll see you February 16 for Season 5!pic.twitter.com/el6ENkIGCM

What do you think? Do you enjoy the Queen Sugar TV series? Are you looking forward to watching the fifth and sixth seasons on OWN?

I truly enjoy this show. My husband and I watch it faithfully. We discovered it by accident one day while looking for something to watch and began ‘binge’ watching the entire season. We just could not stop. Glad it has been renewed for two more seasons. Please keep it going. The caption reads’Disappointed” but that is far from the truth. ENJOYED it should read

I truly enjoy this show. My husband and I watch it faithfully. We discovered it by accident one day while looking for something to watch and began ‘binge’ watching the entire season. We just could not stop. Glad it has been renewed for two more seasons. Please keep it going. The caption reads’Disappointed” but that is far from the truth. ENJOYED it should read