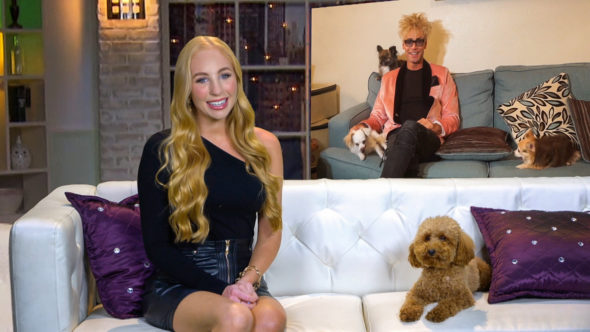 A video clip comedy series on The CW, the World’s Funniest Animals TV show takes a look at the world of animals as these pets — and sometimes, their owners — do funny things that are caught on camera. The series includes viral Internet clips of funny animal moments, humorous animal clips from big-budget movies and favorite TV series, unexpected outtakes, videos of babies and their four-legged friends, as well as celebrities and their pets. Host Elizabeth Stanton introduces the clips, along with a panel of celebrity guests that include Dee Wallace, Tom Arnold, Natalie Lander, James Maslow, Brittany Underwood, Murray SawChuck, Maiara Walsh, Mikalah Gordon, Brian Cooper, Brandon Rogers, Noah Matthews, Carmen Hodgson, and Neel Ghosh.

*12/8/20 update: World’s Funniest Animals has been renewed for a second season.

How phony is the loop of her dogs, when I thought they were really sitting next to her!!! It made me mad until tonights show, and FINALLY THEY WERE IN REAL TIME WITH HER, and they were laying down. They are obviously well behaved, I can see that.

I can’t watch this show with my kids waiting for her breasts to fall out of that awful dress. I thought this was a family show

Love the clips in Worlds Funniest Animals but hate the “guests” that just take up time and serve as useless time fillers. Cut them out and use the time for more clips and you’d have a great shoe. The show “Ridiculous” learned this the hard way. They started with “guests” the first few seasons but enshrined they stopped wasting time having guests and focused on clips, the show greatly improved and ratings went up!!

The video’s are great, but does Liz the host only owns one outfit?

Love the animals but the hostess doesn’t cut it. No interaction with her own dogs. Wears thre same dress. No personality Just show the animal clips please.

Totally agree she is the worst ever, she makes the Gong Show host look good. It is also very bad editing when she comes on screen after
the fact…. sooo lame! Drop her and upgrade to a better host!

I love the show but, Elizabeth does not show any attention to the dogs, does she only have one outfit to wear?

Not a natural host. She seems to be forcing trying to be natural. Hard to watch

I truly enjoy the show. I would give it a very good rate.