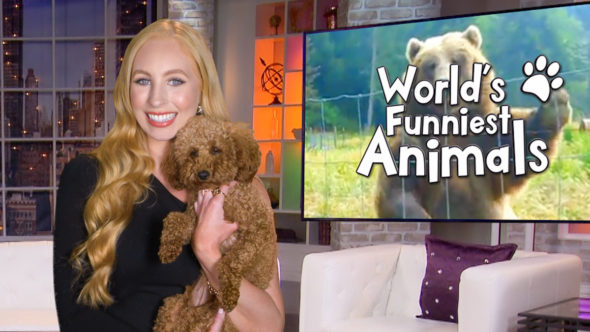 TV show description:
A family comedy series, the World’s Funniest Animals TV show takes a look at the world of animals as these pets — and sometimes, their owners — do funny things that are caught on camera.

The series includes viral Internet clips of funny animal moments, humorous animal clips from big-budget movies and favorite TV series, unexpected outtakes, videos of babies and their four-legged friends, as well as celebrities and their pets.

What do you think? Do you like the World’s Funniest Animals TV show? Do you think it should be cancelled or renewed for another season?

We LOVE. your show THANK YOU FOR MAKING IT !!! You could make more shows like the one we just for dachshunds (& friends) I think it would be a super show. OR a detective or drama show w/dauchhounds & dogs. Weiners are funny and HOT right now. Nicely we dont need clevage on family show. My grandson kept staring and talked about who it was so embarrassing we had to turn it off but I went in the other room to watch. She looks like she had a purple bathing suit on and should have been at the beach… Read more »

The show is good but they need a new host

I hope it renews !! Liked it

Never heard of this but will try to tune in for the new season…. I’d rather watch funny animal that idiot people doing stupid things.

I should hate the show but I found myself enjoy the new show. I hope that there will be a second season.