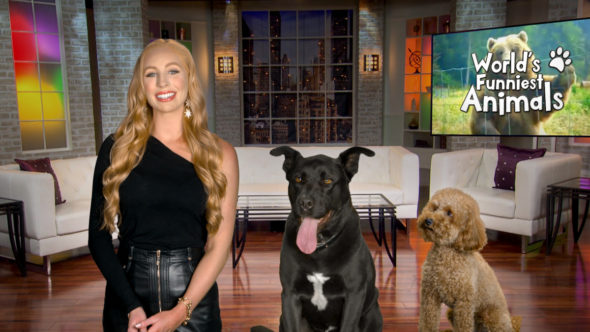 A video comedy series, the World’s Funniest Animals TV show takes a look at the world of animals as these pets — and sometimes, their owners — do funny things that are caught on video. The series includes viral Internet clips of funny animal moments, humorous animal clips from big-budget movies and favorite TV series, unexpected outtakes, videos of babies and their four-legged friends, as well as celebrities and their pets. Host Elizabeth Stanton introduces the clips, along with a panel of celebrity guests. In the first season, they include Dee Wallace, Tom Arnold, Natalie Lander, James Maslow, Brittany Underwood, Murray SawChuck, Maiara Walsh, Mikalah Gordon, Brian Cooper, Brandon Rogers, Noah Matthews, Carmen Hodgson, and Neel Ghosh.

Airing predominately on Friday nights, the first season of World’s Funniest Animals averages a 0.10 rating in the 18-49 demographic and 716,000 viewers. The November 27th (Black Friday) installment drew 992,000 viewers, The CW’s best performance in that timeslot in two years.

It’s unclear when the second season will debut. The first season is scheduled to finish airing on Thursday, December 17th.

What about the network’s other unscripted series? The CW also renewed Penn & Teller: Fool Us for an eighth season today.  Whose Line Is It Anyway? will launch its 17th season (the ninth on The CW) on January 8th. The fate of Masters of Illusion is still up in the air.

What do you think? Have you watched the World’s Funniest Animals TV show? Do you plan to watch season two on The CW?

Is this supposed to be a family show? Why the cleavage and boob flaunting by two of the hosts? For better ratings? Is this necessary?

I’m so happy for this show……. It’s really cute and funny!!