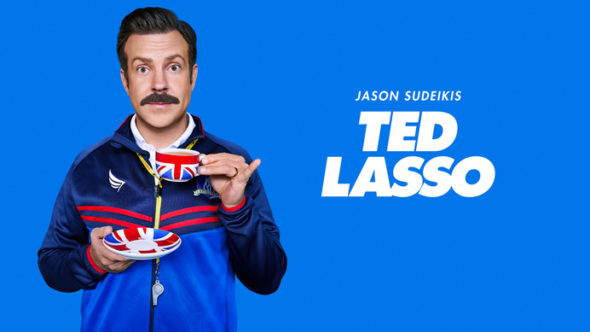 Series executive producer Bill Lawrence has been hinting that season three of Ted Lasso was already in the works and, today, Apple TV+ issued an official renewal. Production on season two is expected to begin in January 2021.

A comedy series, Ted Lasso stars Jason Sudeikis in the title role. Ted is a small-time college football coach from Kansas who is hired to coach a professional soccer team in England — even though he has no prior experience coaching soccer. The TV show also stars Hannah Waddingham, Brendan Hunt, Jeremy Swift, Juno Temple, Brett Goldstein, Phil Dunster, and Nick Mohammed.

Following its breakout first season and early second season renewal, Apple TV+ has renewed “Ted Lasso” for a third season, ahead of its second season start of production in London early January. Since its premiere on August 14, 2020, critics and fans globally have hailed the series as “terrific,” “hilarious,” “heart-swelling” and “infectious.”

The Rotten Tomatoes Certified Fresh first season of “Ted Lasso” is now available for viewers to binge on Apple TV+.

In addition to starring, Sudeikis serves as executive producer, alongside Bill Lawrence (“Scrubs”) via his Doozer Productions, in association with Warner Bros. Television and Universal Television, a division of NBCUniversal Content. Doozer’s Jeff Ingold also serves as an executive producer with Liza Katzer as co-executive producer. The series was developed by Sudeikis, Lawrence, Joe Kelly and Brendan Hunt, and is based on the pre-existing format and characters from NBC Sports.

After its launch on November 1, 2019, Apple TV+ became the first all-original streaming service to launch around the world, and has premiered more original hits and received more award recognitions faster than any other streaming service. Apple Originals have been honored with 118 awards nominations and 39 wins and accolades in just under one year, including a Primetime Emmy Award, Daytime Emmy Awards, SAG Award, NAACP Image Award, Critics Choice Award, Peabody Award and more.

Apple TV+ is available on the Apple TV app in over 100 countries and regions, on over 1 billion screens, including iPhone, iPad, Apple TV, iPod touch, Mac, select Samsung, LG, Sony and VIZIO smart TVs, Amazon Fire TV and Roku devices, and at tv.apple.com, for $4.99 per month with a seven-day free trial. For a limited time, customers who purchase a new iPhone, iPad, Apple TV, Mac or iPod touch can enjoy one year of Apple TV+ for free. This special offer is good for three months after the first activation of the eligible device.

What do you think? Have you watched the first season of Ted Lasso on the Apple TV+ streaming service? Are you planning to check out seasons two and three?