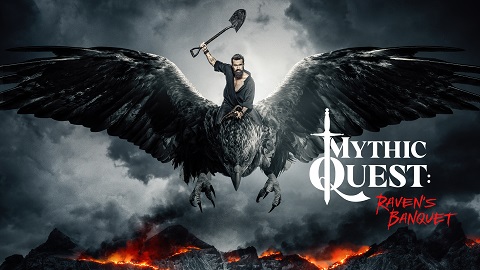 Mythic Quest: Raven’s Banquet hasn’t even had its premiere on Apple TV+ yet, but the series has already been guaranteed a second season. The early renewal was announced at the TCA’s. The series will premiere on the streaming platform on February 7.

Apple TV+ revealed more about the decision to renew the series in a press release. Check that out below.

All nine, half-hour episodes of the live-action comedy’s first season, co-created by McElhenney, Charlie Day and Megan Ganz, will be available to stream in their entirety exclusively on Apple TV+ beginning Friday, February 7.

Mythic Quest: Raven’s Banquet is executive produced by McElhenney and Day under their RCG banner; Michael Rotenberg and Nicholas Frenkel on behalf of 3Arts; and Jason Altman, Danielle Kreinik and Gérard Guillemot for Ubisoft Film & Television. David Hornsby and Megan Ganz also executive produce. The series is produced by the Lionsgate/3 Arts Entertainment venture and Ubisoft.”

What do you think? Is Mythic Quest: Raven’s Banquet on your watch list? Are you glad to see it renewed for a second season?

I am so happy and thankful that MQ will return, and I can’t wait for season two. I’m a big fan of the cast and humor (there, I used “I” five times!). Yay!!!