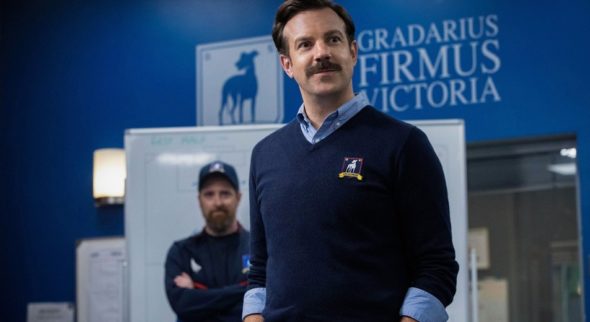 Ted Lasso is coming soon to Apple TV+, and the series now has a premiere date. The comedy show, which stars Jason Sudeikis, will arrive on the streaming service in August.

Apple TV+ revealed a first-look photo (above) and some additional details about the new series in a press release.

“Apple today unveiled a first look at Ted Lasso, a new original comedy series from Jason Sudeikis and Bill Lawrence, that will premiere globally on Apple TV+, alongside a slate of acclaimed and award-winning original series and films, on Friday, August 14.

Sudeikis plays Ted Lasso, a small-time college football coach from Kansas hired to coach a professional soccer team in England, despite having no experience coaching soccer.

In addition to starring, Sudeikis serves as executive producer, alongside Lawrence (Scrubs) via his Doozer Productions, in association with Warner Bros. Television and Universal Television, a division of NBCUniversal Content. Doozer’s Jeff Ingold also serves as an executive producer with Liza Katzer as co-executive producer. The series was developed by Sudeikis, Lawrence, Joe Kelly and Brendan Hunt, and is based on the pre-existing format and characters from NBC Sports.”

What do you think? Do you plan to check out Ted Lasso once it arrives on Apple TV+?