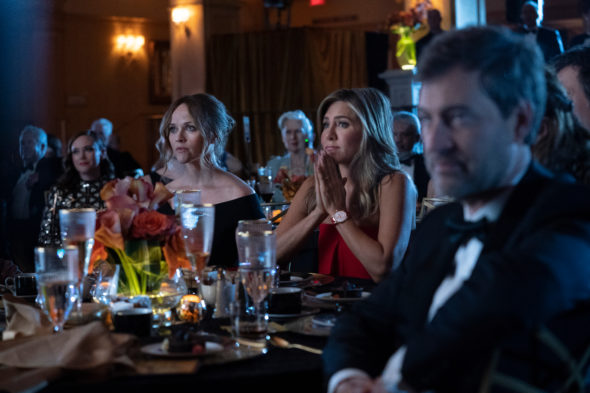 An Apple TV+ satirical drama, The Morning Show stars Jennifer Aniston, Reese Witherspoon, Steve Carell, Billy Crudup, Mark Duplass, Gugu Mbatha-Raw, Néstor Carbonell, Karen Pittman, Bel Powley, Desean Terry, and Jack Davenport. The Morning Show looks at the cutthroat world of morning news and the lives of the people who help America wake up in the morning. The drama looks at the power dynamics between women and men, and women and women, in the workplace. It’s told through the lens of two complicated women who work to navigate the minefield of high-octane jobs, all while facing crises in both their personal and professional lives.

What do you think? Which season one episodes of The Morning Show TV series do you rate as wonderful, terrible, or somewhere between? Do you think that The Morning Show on Apple TV+ should have been renewed for a second season? Don’t forget to vote, and share your thoughts, below.

Through episode six it has my attention! I don’t even think of Jennifer Anniston and Reese Witherspoon as actors any more,

This show is a must see. Not enough stars to give a proper rating to its voice, its importance, and how compelling it is. I look forward to a second season. Bravo to stars and producers Reese Witherspoon and Jennifer Aniston for making this story happen. BTW, the whole cast is stellar. The Finale is mind-blowing in a good way.