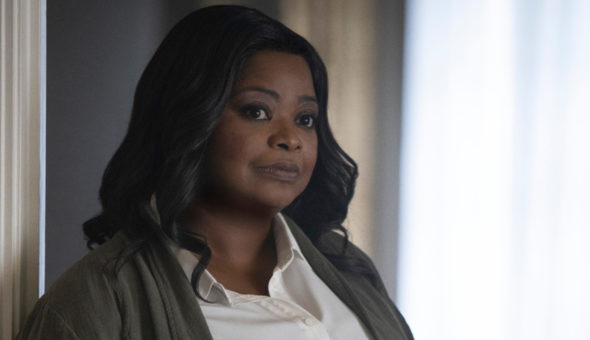 Is Parnell ready for the truth in the first season of the Truth Be Told TV show on Apple TV+? As we all know, the Nielsen ratings typically play a big role in determining whether a TV show like Truth Be Told is cancelled or renewed for season two. Apple TV+ and other streaming platforms, however, collect their own data. If you’ve been watching this TV series, we’d love to know how you feel about the first season episodes of Truth Be Told here. Status Update Below.

Streaming on the Apple TV+ subscription service, Truth Be Told is based on the novel Are You Sleeping by Kathleen Barber. It stars Octavia Spencer, Aaron Paul, Lizzy Caplan, Elizabeth Perkins, Michael Beach, Mekhi Phifer, Tracie Thoms, Haneefah Wood, and Ron Cephas Jones. The show follows Poppy Parnell (Spencer), an investigative reporter who has a successful true-crime podcast. Parnell is compelled to reopen the closed murder case that helped make her a national sensation. She comes face to face with convicted murderer Warren Cave (Paul), the man she helped to put behind bars following the killing of the father of a pair of identical twins (Caplan). Cave claims that he was framed for the crime and Parnell’s subsequent investigation leads her to question issues of privacy, media, and race.

What do you think? Which season one episodes of the Truth Be Told TV series do you rate as wonderful, terrible, or somewhere between? Do you think that Truth Be Told on Apple TV+ should be cancelled or renewed for a second season? Don’t forget to vote, and share your thoughts, below.

3/5/20 update: Truth Be Told has been renewed for a second season.

I loved Truth Be Told. I sincerely hope there is a Season 2, so much could be done with her move to New York and new stories for her podcast. This show had great twists and turns, it really leaves the viewer wanting more.

I thought Truth Be Told was well done, excellent actors and a compelling story. The last episode was a bit confusing and I thought it was done purposefully so that the story could continue. I hope there is a Season 2.

I cant beleive how great this show really was , I figured it would be good but this tv show was more then just good it was fantastic I hope to God they bring it back for another season even if it’s with a new story line ..this show was amazing keeps u on ur feet wondering what will happen next…keep this series please

I really enjoyed the series. Each episode reveals a bit more information with twists and turns. The last episode was excellent. Hoping returns

Excellent show! You experience everyone’s side of the story, please make more, perhaps something from New York, if Poppy is moving back there! Please don’t cancel.

Please bring back Truth Be Told for Season 2!!!!