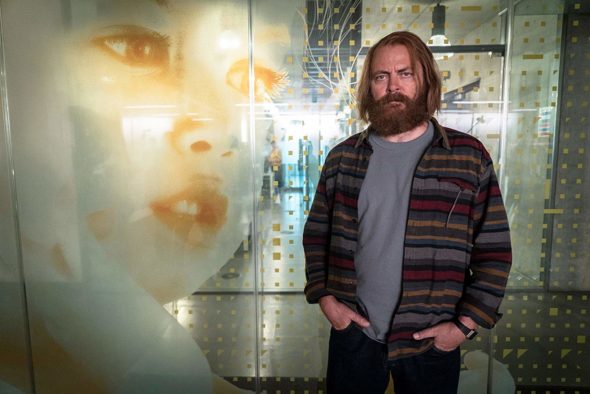 Could there be more to this story? Has the Devs TV show been cancelled? Renewed for a second season on FX on Hulu? The television vulture is watching all the latest cancellation and renewal news, so this page is the place to track the status of Devs, season two. Bookmark it, or subscribe for the latest updates. Remember, the television vulture is watching your shows. Are you?

Streaming on the Hulu subscription service, the Devs TV show stars Sonoya Mizuno, Nick Offerman, Jin Ha, Karl Glusman, Zach Grenier, Stephen McKinley Henderson, Cailee Spaeny, and Alison Pill. The story follows Lily Chan (Mizuno), a young software engineer who works for Amaya, a cutting-edge tech company based in Silicon Valley. Her boyfriend is Sergei (Glusman), an AI coder at the company. After Sergei’s disappearance, Lily suspects foul play and begins to investigate. She quickly realizes that all roads lead to Amaya’s enigmatic CEO, Forest (Offerman), and Devs, the company’s secret development division. In her quest to discover the truth, Lily uncovers a technology-based conspiracy that could change the world.

Will FX/Hulu cancel or renew Devs for season two? This is a true mini-series, one that’s designed to run for only eight episodes. Perhaps series creator Alex Garland will want to continue the tale someday? I’ll keep my ears open and an eye out for news. Subscribe for free alerts on Devs cancellation or renewal news.

What do you think?  Were you hoping that the Devs TV show would be renewed for a second season? Would you watch season two on Hulu?

I absolutely LOVED this show. I literally couldn’t stop watching and stayed up almost all night to finish it. Anyone who says that season one is complete by itself obviously doesn’t understand or agree with the theory of infinite possibilities and story lines that Devs showcases. There are so many options that season two could take, and so much potential for another amazing chapter. Please please pleeeeaaase tell me another story!!

It was one of the better programs I’ve seen in a while. There are a lot of different ways to take season 2. I hope to find out.

Yes, my boyfriend and I REALLY hope there’s a season two!!! The end of season one leaves SO many interesting angles the show could take! Please don’t let us down!!!

DEVS is brilliant! Game changing. Great science fiction Ai, screens full of perfect vibrant psychedelic colour like never seen before, beautiful natural sounds and electronic music. Can’t understand how so many people are jumping on the band wagon thinking that it was a slow starter! I thought each episode was perfectly balanced, guess these people are simply impatient or just don’t connect with the series. 10/10 here anyways! Bring on season 2.

I hope DEVS returns. I think the story began to unfold too late. It took some effort to stay engaged and trust that the excellent cast signed on to this project for a good reason. The slow burn in the beginning made me wonder what I missed or didn’t understand. Then the veil began lifting and connections were being made. Characters began to develop. It is ready for another season. The story just began…

A second season would cheapen the first. From a story line aspect, it’s inconceivable to me that a second season could be more than a second-rate effort to capitalize on the art of the first.