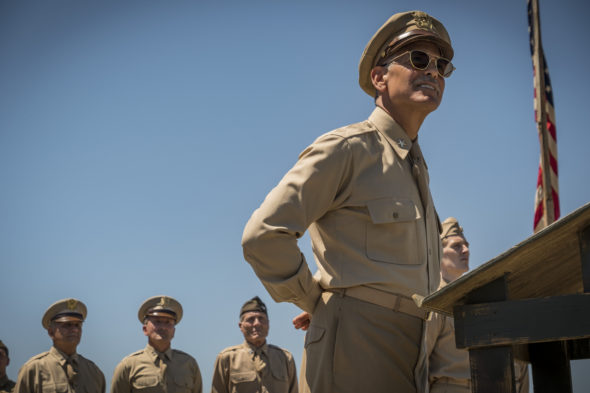 Is the catch that this is a mini-series, or will there be more fun with Yossarian? Has the Catch-22 TV show been cancelled or renewed for a second season on Hulu? The television vulture is watching all the latest TV cancellation and renewal news, so this page is the place to track the status of Catch-22 season two. Bookmark it, or subscribe for the latest updates. Remember, the television vulture is watching your shows. Are you?

Unless they decide to publicize viewership statistics, it is usually difficult to predict whether Hulu will cancel or renew a series like Catch-22 for season two. In this case, I expect Catch-22 will be a one-season series. It was made as a mini-series and is based on the novel of the same name, so there’s a conclusion.

That said, if it proves to be a smash-hit for Hulu, it’s possible they’ll back up the money truck and ideas for another season will flow like a river. It happened with The Handmaid’s Tale. Prior to his 1999 death, Heller did revisit some of the characters in his book Closing Time, as well as a one-act play and some short stories, so there’s potentially some more source material to plunder. Until we get confirmation either way, I’ll keep an eye on the trades and update this page with any developments. Subscribe for free Catch-22 cancellation and renewal alerts.

What do you think? Do you hope the Catch-22 TV series will be renewed for a second season?

I really enjoyed the show. I was binge watching it just as he hit 51 missions almost got nits blown off then episode 6 ends then I go watch episode 7 and there isn’t one available on hulu I’m very disappointed…

Catch-22 is amazing and hopefully will be renewed for season 2! It’s one of a kind and should keep going!!

I’ve loved catch 22 ever since I read the book. keep it going it’s great

Please keep the show going it was a great show. And I would love to see a second season.

Please keep this show going, use some of that George Clooney money if you gotta

Loved Catch 22, can’t wait to see what happens next. Please renew for a 2nd season

Yes! There definitely needs to be a season 2! Make it happen!

Yes the funniest book I ever read keep it going c

Yes I love this series. Would hate to see it go