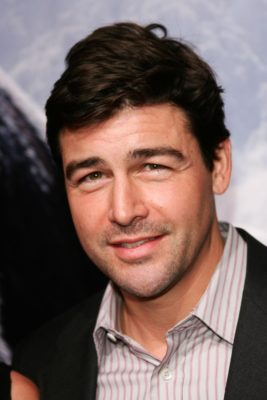 Kyle Chandler is headed to Hulu. Today, the streaming service announced the Bloodline star has joined the upcoming TV series adaptation of Catch-22.

Kyle Chandler has been cast as Colonel Cathcart in Hulu’s six-part limited series Catch-22, from Paramount Television, Anonymous Content, George Clooney and Grant Heslov. Colonel Cathcart is a full Colonel that takes himself very seriously.
George Clooney will now play Scheisskopf. Scheisskopf is a training commander at cadet school in California. Ambitious, humorless, inept, angry, sadistic – and above all else, obsessed with parades and winning parade tournaments. At cadet school he makes the men’s lives a living hell. Deep down he’s just an angry idiot, so there’s no real danger he’ll ever be sent overseas. And then: he is sent overseas. As the Head of Operations for the entire Mediterranean Theater. And straight back into Yossarian’s life.
Kyle was awarded with the Primetime Emmy for “Outstanding Lead Actor in a Drama Series” for his portrayal of Coach Taylor on the critically acclaimed series “Friday Night Lights” in addition to receiving back to back Primetime Emmy nominations for his performance in “Bloodline.”
Kyle will be seen be next in Universal Pictures and Amblin Entertainment’s drama First Man from Oscar nominated director Damien Chazelle. The film, which is based off James Hansen’s biography First Man: A Life of Neil A. Armstrong, follows Neil Armstrong and the legendary space mission that led him to become the first man to walk on the Moon and recently wrapped production on the next installment in the Godzilla MonsterVerse.
Kyle is represented by Brillstein Entertainment Partners and The Gersh Agency.
Catch-22 will be executive produced by Clooney and Grant Heslov on behalf of Smokehouse Pictures, along with Richard Brown and Steve Golin on behalf of Anonymous Content. Luke Davies and David Michôd are co-writers and executive producers for the series.
Clooney will direct the series alongside Heslov. Ellen Kuras will serve as producer and direct two episodes.
Based on Joseph Heller’s seminal novel of the same name, Catch-22 is the story of the incomparable, artful dodger, Yossarian (Christopher Abbott), a US Air Force bombardier in World War II who is furious because thousands of people he has never met are trying to kill him. But his real problem is not the enemy, but rather his own army which keeps increasing the number of missions the men must fly to complete their service. Yet if Yossarian makes any attempt to avoid his military assignments, he’ll be in violation of Catch-22, a hilariously sinister bureaucratic rule which specifies that a concern for one’s own safety in the face of dangers which are real and immediate is the process of a rational mind; a man is considered insane if he willingly continues to fly dangerous combat missions, but a request to be removed from duty is evidence of sanity and therefore makes him ineligible to be relieved from duty.
Previously announced Hugh Laurie will play Major de Coverley.

What do you think? Are you a fan of Catch-22? Will you watch the Hulu series?