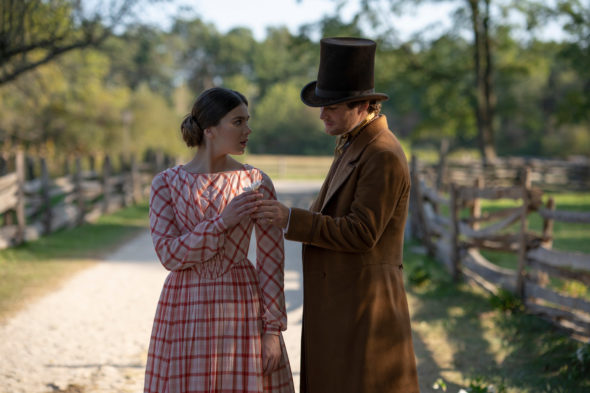 Will Emily get what she wants in the second season of the Dickinson TV show on Apple TV+? As we all know, the Nielsen ratings typically play a big role in determining whether a TV show like Dickinson is cancelled or renewed for season three. Apple TV+ and other streaming platforms, however, collect their own data. If you’ve been watching this TV series, we’d love to know how you feel about the second season episodes of Dickinson here.  *Status update below.

An Apple TV+ historical drama, the Dickinson TV show stars Hailee Steinfeld, Jane Krakowski, Anna Baryshnikov, Ella Hunt, Toby Huss and Adrian Blake Enscoe, and Wiz Khalifa, with Finn Jones and Pico Alexander recurring. Guests include Nick Kroll, Timothy Simons, Ayo Edebiri, and Will Pullen. A coming of age story set in the 19th century, this series explores the constraints of society, gender, and family from the perspective of rebellious young Emily Dickinson (Steinfeld), a legendary American poet who was mostly unpublished during her lifetime. Other characters include her very serious mother (Krakowski), her humorless father (Huss), her handsome brother (Enscoe), her bubbly baby sister (Baryshnikov), and her dark and intelligent best friend (Hunt). In the second season, Emily is pulled out of her private literary life and thrust into the public eye, while struggling with the sense that the pursuit of fame might be a dangerous game for her to play.

What do you think? Which season two episodes of the Dickinson TV series do you rate as wonderful, terrible, or somewhere between? Are you glad that Dickinson on Apple TV+ has been renewed for a third season? Don’t forget to vote, and share your thoughts, below.

*9/4/2021 Update: Apple TV+ has announced that season three is the end of Dickinson.