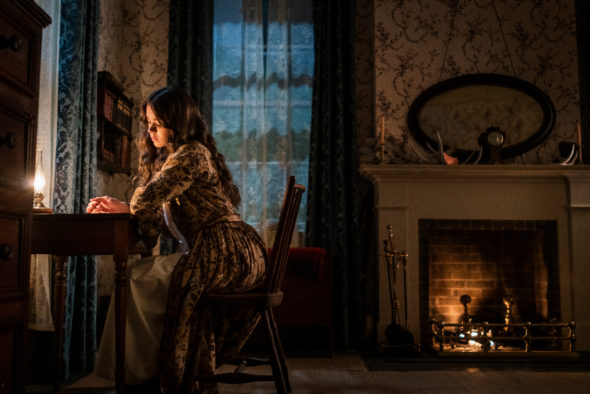 TV show description:
A coming of age story set in the 19th century, the Dickinson series explores the constraints of society, gender, and family from the perspective of rebellious young Emily Dickinson (Steinfeld), a legendary American poet who was mostly unpublished during her lifetime.

Emily’s mother, Mrs. Emily Dickinson (Krakowski), seems to have nothing in common with her daughter except her name. She is a deeply serious woman. Despite the family wealth, Mrs. Dickinson has dedicated her life to the pursuit of rigorous housekeeping and homemaking.

Emily’s father, Edward Dickinson (Huss), helped found Amherst College and can often be stern, cold, and humorless. He has a deep dedication to hard, tangible work and has a need to follow rules and proper decorum. He loves his daughter and wants to nurture her gifts but doesn’t know how to do so without crushing her.

Austin Dickinson (Enscoe) is Emily’s handsome and dutiful brother, the ideal of a strapping young eligible man in Amherst at this time. Austin is beloved by many, but only has eyes for Sue (Hunt), Emily’s dark and intelligent best friend. Austin doesn’t always understand Emily but admires her. Their biggest source of conflict is Sue, whose love he is not willing to share.

Lavinia Dickinson (Baryshnikov) is Emily’s sister and the baby of the family in all ways. She’s the complete inverse of Emily — bubbly, earnest, optimistic, and not always the sharpest tool in the shed. The two love each other very much but Lavinia is frustrated by her sister’s refusal to marry.

Series Finale:
Episode #30 — This was a Poet
Emily asks Betty to help her design a new dress. The Dickinson family is surprised by an unexpected guest.
First aired: December 24, 2021.

What do you think? Do you like the Dickinson TV show on Apple TV+? Do you think it should have ended or been renewed for a fourth season?