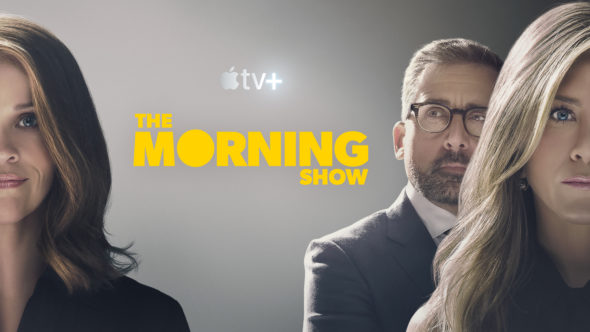 TV show description:
A satirical drama series, The Morning Show looks at the cutthroat world of morning news and the lives of the people who help America wake up in the morning. The drama looks at the power dynamics between women and men, and women and women, in the workplace. It’s told through the lens of two complicated women who work to navigate the minefield of high-octane jobs, all while facing crises in both their personal and professional lives.

Alex Levy (Aniston) is the distinguished host of UBA’s The Morning Show. She is lovely and intelligent, but also lonely and exhausted. As a result, she’s been on cruise control for years, allowing others to take the driver’s seat. The removal of her co-host, charismatic Mitch Kessler (Carell), gives Alex a wake-up call for her career and life.

Bradley Jackson (Witherspoon) is a tenacious though tired journalist who doesn’t care about her beauty or exhaustion. When she’s presented with the opportunity to host alongside Alex, she must decide if she wants to make the difficult transition into the intense media spotlight.

Cory Ellison (Crudup) is the forward-thinking president of the News Division at UBA. He’s been brought over from the recently revitalized Entertainment Division to bring some “hip juju”. Charles “Chip” Black (Duplass) is the stressed and overwhelmed executive producer of The Morning Show.

The whip-smart and charming head talent booker for the program, Hannah Shoenfeld (Mbatha-Raw) is intimidating, but not easily intimidated. Mia Jordan (Pittman) is assigned as Bradley’s producer.

Yanko Flores (Carbonell) is The Morning Show’s endearing weatherman. A young, determined production assistant, Claire Conway (Powley) is the daughter of someone important but nobody at work knows it.

Daniel Henderson (Terry) is the intelligent and very ambitious co-anchor of the last hour on The Morning Show, a pop-culture/entertainment hour called The Twist. Alison Namazi (Gavankar) is Daniel’s co-host.

What do you think? Do you like The Morning Show TV show on Apple TV+? Do you think it should be cancelled or renewed for another season?

Can’t wait for Season 2. Please don’t cancel. Better than anything on prime time.

Please dont cancel this is so good. Seems the best series get canceled.