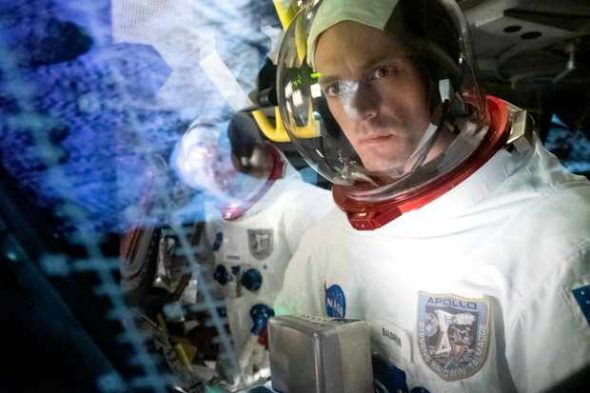 TV show description:
Created by Ronald D. Moore, Matt Wolpert, and Ben Nedivi, the For All Mankind story is told through the lives of astronauts, engineers, and their families. An alternate history drama series, it imagines a world in which the global space race never ended and the space program remained the cultural centerpiece of America’s hopes and dreams.

Edward Baldwin (Kinnaman) is a very confident astronaut in NASA’s Apollo program. He knows exactly how far to push the envelope and when to pull back. Karen (Vansanten) is his model astronaut’s wife. She is always put-together and self-possessed. If heaven falls tomorrow, Karen will be the first to pick up the pieces.

Gordo Stevens (Dorman) is driven by a need for speed and has an even bigger need to be loved. His flaws are hidden in plain sight by his mischievous sense of fun, roguish charisma and God-given talents as a pilot. His wife, Tracy (Jones), struggles with her role as an astronaut’s wife and the sacrifices required. Underneath her demure exterior lies ambition and toughness.

A mid-level engineer in Mission Control, Margo Madison (Schmidt) is sharp and ambitious and she struggles to advance in a male-dominated era.

A gifted pilot, Ellen Waverly (Balfour) pursued her love of flying and adventure instead of a “dignified” profession worthy of her social status — much to her parents’ chagrin.

Danielle Poole (Marshall) works on the engineering side of NASA. She knows she must be better than her white and mostly male peers in every respect.

Octavio Rosales (Del Puerto) is a diligent worker who will do whatever it takes to give his daughter Aleida (Trujillo), a natural mathematician, a life beyond the poverty he was raised in. Together, Octavio and Aleida cross the border illegally to start a new life in the United States. Octavio soon after accepts a job as a custodian at the Johnson Space Center.

A woman of singular confidence, Molly Cobb (Walger) is a fearless veteran pilot and barnstormer who was a part of the original group of women who trained to be astronauts in the early 1960s, before the program was scrapped.

What do you think? Do you like the For All Mankind TV show on Apple TV+? Do you think it should be cancelled or renewed for another season?

the vonbraun of this serie, so good and so sensible, make me sick! it stinks! kill the show an destroy season one, please