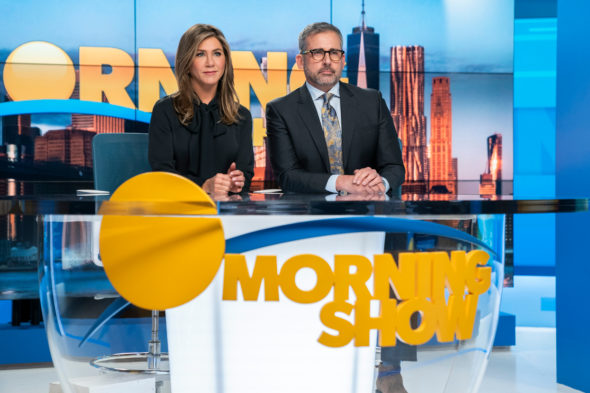 Does this series shine? Has The Morning Show TV show been cancelled or renewed for a second season on Apple TV+? The television vulture is watching all the latest cancellation and renewal news, so this page is the place to track the status of The Morning Show, season two. Bookmark it, or subscribe for the latest updates. Remember, the television vulture is watching your shows. Are you?

Streaming on the Apple TV+ subscription service, The Morning Show stars Jennifer Aniston, Reese Witherspoon, Steve Carell, Billy Crudup, Mark Duplass, Gugu Mbatha-Raw, Néstor Carbonell, Karen Pittman, Bel Powley, Desean Terry, and Jack Davenport. The Morning Show looks at the cutthroat world of morning news and the lives of the people who help America wake up in the morning. The drama looks at the power dynamics between women and men, and women and women, in the workplace. It’s told through the lens of two complicated women who work to navigate the minefield of high-octane jobs, all while facing crises in both their personal and professional lives.

Apple TV+ ordered two seasons of The Morning Show right out of the gate so there’s no need to worry about it being cancelled. I’ll update this page with breaking developments. Subscribe for free alerts on The Morning Show cancellation or renewal news.

What do you think? Are you glad that The Morning Show TV show has been renewed for a second season? How would you feel if Apple TV+ had cancelled this TV series, instead?

I love the Morning Show. I hope there is a season two. Please Apple TV do not cancel this show it’s fantastic with all the language.

Really enjoyed this series. Great acting by all.
Anxiously awaiting series 2
Will weigh watching again if the language is still foul.
PLEASE OMIT the F___ word.
This downgrades the actors integrity and
dismisses the writers gift of writing.

I loved it. I loved the passion Jennifer and Reece gave to their characters. The dorm room scene of Alex talking to her daughter was iconic. Some of us, as mothers doing our best, have secretly wanted to do the same but never in our wildest dreams would let the verbal onslaught erupt!

Watching the last episode was excruciating and brilliant. All the previous segments chapters were leading to the most incredible climactic bomb. Glad that Apple TV showed commitment. All of the leading actors were fantastic in their roles. I really hated the Mitch and Fred characters.

The show was great. Watching episode 8 was painful. I had tears rolling down my face during episode 10. I’m glad there’s going to be another season.

I loved the show. Watching episode 8 was painful. I had tears rolling down my face during the last episode. I’m glad there’s going to be another season.

The morning show is great. Can’t wait for the next season