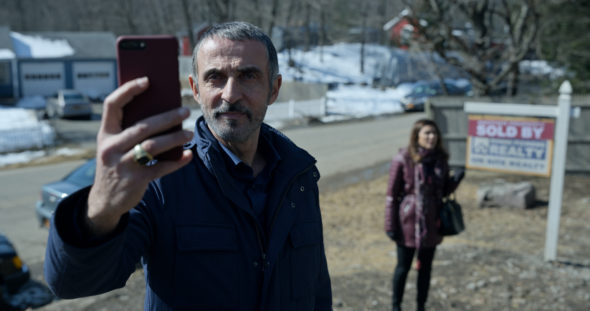 Is the American Dream still alive? Has the Little America TV show been cancelled or renewed for a second season on Apple TV+? The television vulture is watching all the latest cancellation and renewal news, so this page is the place to track the status of Little America, season two. Bookmark it, or subscribe for the latest updates. Remember, the television vulture is watching your shows. Are you?

Streaming on the Apple TV+ subscription service, Little America is based on true stories that are featured in Epic Magazine. The show goes beyond the headlines to bring to life the funny, romantic, heartfelt, and surprising stories of immigrants in America. The first season cast includes Zachary Quinto, Haaz Sleiman, Melanie Laurent, Shaun Toub, Conphidance, and Sherilyn Fenn.

We don’t have to wonder if Apple TV+ will cancel or renew Little America for season two. Apple has already renewed the show for a second season. I’ll keep my ears open and an eye out for news though, and will update this page with breaking developments. Subscribe for free alerts on Little America cancellation or renewal news.

What do you think? Do you hope the Little America TV show will be renewed for a second season? How would you feel if Apple TV+ cancelled this TV series, instead?