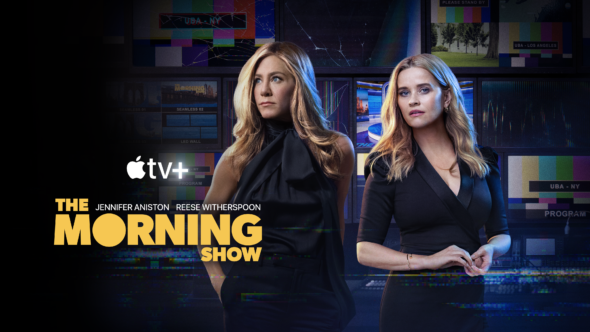 Are tougher times ahead for Alex and Bradley? Has The Morning Show TV show been cancelled or renewed for a third season on Apple TV+? The television vulture is watching all the latest cancellation and renewal news, so this page is the place to track the status of The Morning Show, season three. Bookmark it, or subscribe for the latest updates. Remember, the television vulture is watching your shows. Are you?

Streaming on the Apple TV+ subscription service, The Morning Show stars Jennifer Aniston, Reese Witherspoon, Steve Carell, Billy Crudup, Mark Duplass, Nestor Carbonell, Karen Pittman, Bel Powley, Desean Terry, Janina Gavankar, Tom Irwin and Marcia Gay Harden, Greta Lee, Ruairi O’Connor, Hasan Minhaj, Holland Taylor, Tara Karsian, Valeria Golino, and Julianna Margulies. The story follows the cutthroat world of morning news and the lives of the people who help America wake up in the morning. It’s told through the lens of two complicated women who work to navigate the minefield of high-octane jobs, all while facing crises in both their personal and professional lives. Season two finds the team emerging from the wreckage of Alex (Aniston) and Bradley’s (Witherspoon) actions with a new UBA and a world in flux.

Unless they decide to publicize viewership, it is difficult to predict whether Apple TV+ will cancel or renew The Morning Show for season three. Since Apple TV+ isn’t ad-supported, it can take a chance on series it believes in, but sooner or later it comes down to production costs, versus viewership numbers. This show is one of the streaming service’s highest-profile series so, unless the team behind The Morning Show wants to end it, I have no doubt that it will be renewed. I’ll keep my ears open and an eye out for news, and will update this page with breaking developments. Subscribe for free alerts on The Morning Show cancellation or renewal news.

What do you think? Are you glad that The Morning Show TV show has been renewed for a third season? How would you feel if Apple TV+ had cancelled this TV series, instead?

I truly hope The Morning Show gets renewed for more seasons.. I have enjoyed it and am already rooting for Alex and Charlie to hook up.

I enjoy The Morning Show. Really hope the show gets renewed for a third season. Love all the characters and subjects they touch upon