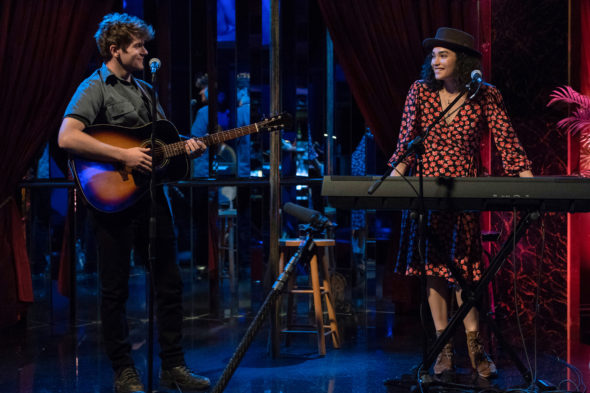 Does this show hit the right notes? Has the Little Voice TV show been cancelled or renewed for a second season on Apple TV+? The television vulture is watching all the latest cancellation and renewal news, so this page is the place to track the status of Little Voice, season two. Bookmark it, or subscribe for the latest updates. Remember, the television vulture is watching your shows. Are you?

Streaming on the Apple TV+ subscription service, the Little Voice TV show stars Brittany O’Grady, Sean Teale, Colton Ryan, Shalini Bathina, Kevin Valdez, and Phillip Johnson Richardson. It is a coming-of-age story set in the diverse musicality of New York. The show explores the universal journey of finding your authentic voice in your early 20s — and the courage to use it. Bess Alice King (O’Grady) is a uniquely talented performer who struggles to fulfill her dreams while handling rejection, dating drama, and family issues.

Unless they decide to publicize viewership, it is difficult to predict whether Apple TV+ will cancel or renew Little Voice for season two. However, since Apple TV+ isn’t ad-supported and is still establishing itself, I think this show is likely to be renewed. I’ll keep my ears open and an eye out for news, and will update this page with breaking developments. Subscribe for free alerts on Little Voice cancellation or renewal news.

8/5/21 update: Little Voice has been cancelled by Apple TV+.

What do you think? Were you hoping that the Little Voice TV show would be renewed for a second season? Are you sorry that Apple TV+ has cancelled this TV series, instead?

I am sad if it is cancelled, I thought it was a very good show, I was captured by all the story lines and was invested in the character’s futures. I also loved the music – I could see Sara Bareilles touch on the show.

I cannot believe this news…. hope it will be back in a different way.
I loved narrative, act, fashion, and music, all of them!

What a great show-it’s uplifting. Great chemistry among a wonderful cast of believable characters. It would be a shame if it is not revived!

This is crazy! Little Voice was an incredible show! The cast has such talent (especially the musical chemistry between Brittany and Colton), and the writing was wonderful! It was a true love letter to New York City — lovely music and sweet relationships between characters you could really root for and love. Louie was an amazing character, and I loved his musical theatre expertise! There were a lot of heartwarming moments, like Bess performing “Moon River” in the nursing home and the power of music to help people remember and connect with each other. Prisha and Benny were also wonderful… Read more »

I love this show. So sad!

Love this show and am waiting for it to return