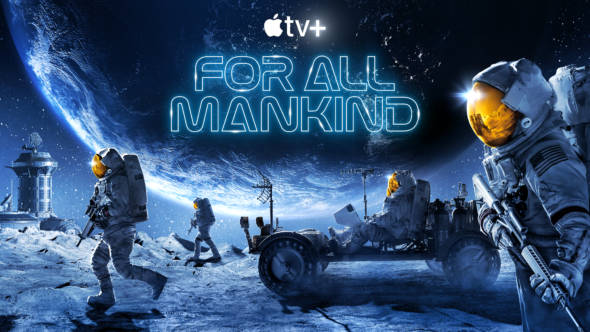 Could this story end with nuclear war? Has the For All Mankind TV show been cancelled or renewed for a third season on Apple TV+? The television vulture is watching all the latest cancellation and renewal news, so this page is the place to track the status of For All Mankind, season three. Bookmark it, or subscribe for the latest updates. Remember, the television vulture is watching your shows. Are you?

Streaming on the Apple TV+ subscription service, the For All Mankind TV show stars Joel Kinnaman, Michael Dorman, Shantel Vansanten, Wrenn Schmidt, Sarah Jones, Jodi Balfour, Sonya Walger, Krys Marshall, Cynthy Wu, Casey Johnson, and Coral Pena. Created by Ronald D. Moore, Matt Wolpert, and Ben Nedivi, the series’ story is told through the lives of astronauts, engineers, and their families. It imagines a world in which the global space race never ended and the space program remained the cultural centerpiece of America’s hopes and dreams. Season two picks up in 1983, at the height of the Cold War with tensions between the United States and the USSR at their peak. Ronald Reagan is president and the greater ambitions of science and space exploration are at threat of being squandered as the US and Soviets go head-to-head to control sites rich in resources on the moon. The Department of Defense has moved into Mission Control, and the militarization of NASA becomes central to several characters’ stories. Some fight it, some use it as an opportunity to advance their own interests, and some find themselves at the height of a conflict that may lead to nuclear war.

Unless they decide to publicize viewership, it is typically difficult to predict whether Apple TV+ will cancel or renew a series. However, in this case, we already know that For All Mankind has been renewed for a third season. I’ll keep my ears open and an eye out for news, and will update this page with breaking developments. Subscribe for free alerts on For All Mankind cancellation or renewal news.

What do you think? Are you glad that the For All Mankind TV show has been renewed for a third season? How would you feel if Apple TV+ had cancelled this TV series, instead?