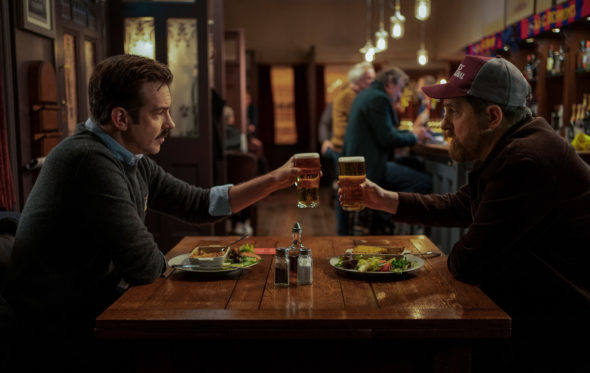 Is this comedy series still a winner? Has the Ted Lasso TV show been cancelled or renewed for a third season on Apple TV+? The television vulture is watching all the latest cancellation and renewal news, so this page is the place to track the status of Ted Lasso, season three. Bookmark it, or subscribe for the latest updates. Remember, the television vulture is watching your shows. Are you?

Streaming on the Apple TV+ subscription service, the Ted Lasso TV show stars Jason Sudeikis, Hannah Waddingham, Brendan Hunt, Jeremy Swift, Juno Temple, Brett Goldstein, Phil Dunster, Nick Mohammed, and Sarah Niles. The series revolves around Ted Lasso (Sudeikis), a small-time college football coach from Kansas. He’s hired to coach a professional British soccer team, despite having no experience coaching the sport. But what he lacks in knowledge, he makes up for with optimism, underdog determination, and biscuits. In season two, a sports psychologist has been brought in to work with AFC Richmond.

We don’t have to wonder about the future of Ted Lasso right now since the comedy has already been renewed for a third season. I’ll keep my ears open and an eye out for news, and will update this page with breaking developments. Subscribe for free alerts on Ted Lasso cancellation or renewal news.

What do you think? Are you glad that the Ted Lasso TV show has been renewed for a third season? How would you feel if Apple TV+ had cancelled this TV series, instead?