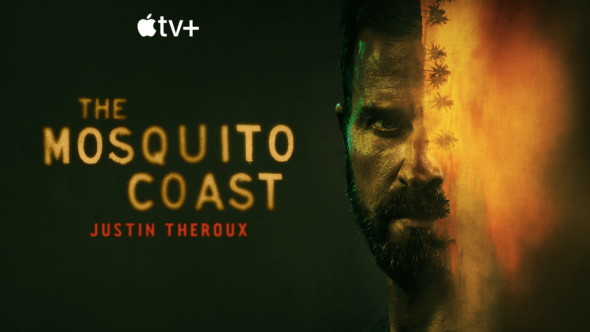 Is there more story to tell? Has The Mosquito Coast TV show been cancelled or renewed for a second season on Apple TV+? The television vulture is watching all the latest cancellation and renewal news, so this page is the place to track the status of The Mosquito Coast, season two. Bookmark it, or subscribe for the latest updates. Remember, the television vulture is watching your shows. Are you?

Streaming on the Apple TV+ subscription service, The Mosquito Coast TV show stars Justin Theroux, Melissa George, Logan Polish, and Gabriel Bateman, with John J. Concado, Kimberly Elise, and Scotty Tovar in recurring roles. The story follows the dangerous journey of a radical idealist and brilliant inventor, Allie Fox (Justin Theroux), and his family — wife Margot (George), teenage daughter Dina (Polish), and young son Charlie (Bateman). After they suddenly find themselves in trouble with the United States government, the patriarch uproots his family and they go on the run to Mexico.

Unless they decide to publicize viewership, it is difficult to predict whether Apple TV+ will cancel or renew The Mosquito Coast for season two. That being said, since it’s based on a close-ended novel, it seems like this may be intended as a one-season show. I’ll keep my ears open and an eye out for news, and will update this page with breaking developments. Subscribe for free alerts on The Mosquito Coast cancellation or renewal news.

6/2/2021 update: The Mosquito Coast TV show has been renewed for a second season on Apple TV+.

What do you think?  Are you glad that The Mosquito Coast TV show has been renewed for a second season? How would you feel if Apple TV+ had cancelled this TV series, instead?