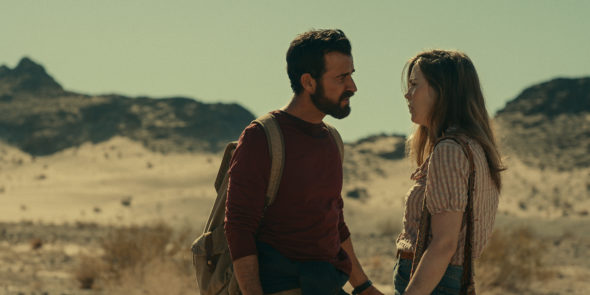 The Mosquito Coast has its second season premiere date on Apple TV+. The streamer announced that the drama series will return on November 4th with the release of a trailer. Justin Theroux, Melissa George, Logan Polish, and Gabriel Bateman star in this series which follows a man who takes his family on the run into the Guatemalan jungle.

Based on Paul Theroux’s best-selling novel, “The Mosquito Coast” follows the dangerous journey of Allie Fox, a brilliant inventor and stubborn idealist, who uproots his family on a dangerous quest to find refuge from the U.S. government, cartels, and hitmen. In season two, after barely escaping Mexico with their lives, the Foxes venture deep into the Guatemalan jungle to meet up with an old friend and her community of refugees. This new refuge creates trouble for the Foxes though when they become entangled in a conflict between a local drug lord and his family. At odds about whether to settle down or keep moving, Allie and Margot pursue different paths to secure their family’s future. The outcome of which will either unite the family or tear it apart forever.

Catch up on the first season of “The Mosquito Coast,” now streaming on Apple TV+.

Apple TV+ offers premium, compelling drama and comedy series, feature films, groundbreaking documentaries, and kids and family entertainment, and is available to watch across all your favorite screens. After its launch on November 1, 2019, Apple TV+ became the first all-original streaming service to launch around the world, and has premiered more original hits and received more award recognitions faster than any other streaming service in its debut. To date, Apple Original films, documentaries, and series have been honored with 276 wins and 1,153 award nominations and counting, including multi-Emmy Award-winning comedy “Ted Lasso” and this year’s Oscar Best Picture winner “CODA.”

Check out the trailer for The Mosquito Coast season two below.

What do you think? Are you excited to see new episodes of The Mosquito Coast on Apple TV+ next month?