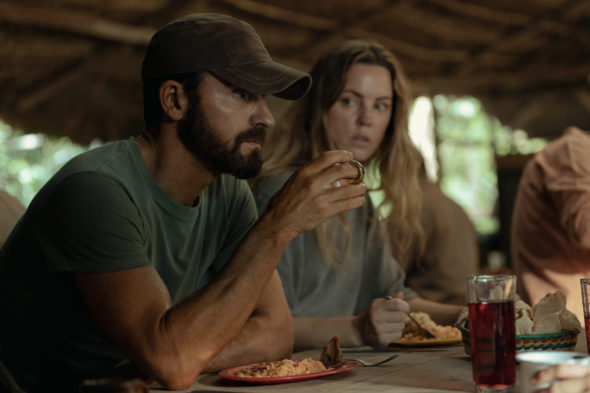 Allie Fox and his family won’t find what they’re looking for, at least on Apple TV+. The streaming service has cancelled The Mosquito Coast TV series after 17 episodes, and there won’t be a third season.

A drama series from Neil Cross, loosely based on the 1981 novel by Paul Theroux, The Mosquito Coast TV show stars Justin Theroux (Paul’s nephew), Melissa George, Logan Polish, Gabriel Bateman, Ian Hart, Ariyon Bakare, Natalia Cordova-Buckley, and Daniel Raymont. The story follows the dangerous journey of a radical idealist and brilliant inventor, Allie Fox (Justin Theroux), and his family — wife Margot (George), teenage daughter Dina (Polish), and young son Charlie (Bateman). After they suddenly find themselves in trouble with the United States government, the patriarch uproots his family, and they go on the run to Mexico.

The show launched in April 2021. Filming on the first season was shut down multiple times due to the pandemic and yielded seven episodes. Mosquito Coast was renewed for a second season of 10 episodes just before the first season finale’s release. Season two premiered in November of last year and wrapped on January 6th with a cliffhanger.

The show is essentially a prequel, leading up to the events in the novel and the 1986 film starring Harrison Ford, Helen Mirren, Andre Gregory, and River Phoenix. Paul Theroux told Deadline that if there had been a third season, it would segue into the book and movie’s search for a utopian community. Ultimately, the family would find the same problems. Theroux explained:

“Because there is no such thing as utopia. It doesn’t exist. The trouble with people who try to create utopias, like Allie Fox or Colonel Kurtz, is while they left the United States, America and its flaws are within them. You can’t create a pure society, especially if you’re basically a flawed character. Something is gonna go wrong no matter what happens. You create this society, it seems to be going well, but there’s always a flaw. And the flaw is in the creator.

One of the inspirations for the book was Jim Jones. Remember him? Mid to late 70s, Jones was trying to create a utopia in Guyana. He had ideas, and it ended in mass suicide, one of the most horrible events in my lifetime. More than 900 people dead. But while they were building it, they were growing plants, and trying to create a society that was equal and colorblind and all that. Talk about an idealist who really had a screw loose. What Jim Jones did, I couldn’t find elsewhere in history, where someone’s leading his flock to this jungle place. They create a society, they build, they have God, they have houses, they have food, speeches, sing songs. And it all ends to the mass suicide. That to me was an American tragedy.”

What do you think? Have you kept up with The Mosquito Coast TV series on Apple TV+? Are you disappointed that there won’t be a third season?

All subscriptions services have become just as bad as their predecessors. Start a show, then they just drop it. I’m fed up with the lot of them. No respect for us, then no dollars for them.

I am so bummed out there will be no season three of Mosquito Coast. We genuinely liked the show.

I would like to have the show renewed for a third season!! It was one of my favorite shows.

I’m very disappointed that there’s no Season 3. I really enjoyed the shows!