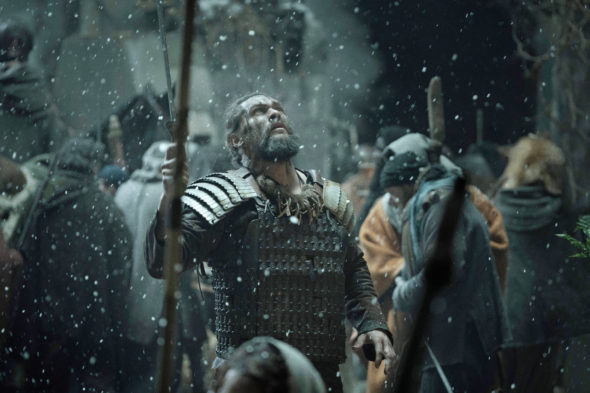 Can Baba protect those he loves? Has the See TV show been cancelled or renewed for a third season on Apple TV+? The television vulture is watching all the latest cancellation and renewal news, so this page is the place to track the status of See, season three. Bookmark it, or subscribe for the latest updates. Remember, the television vulture is watching your shows. Are you?

Streaming on the Apple TV+ subscription service, the See TV show stars Jason Momoa, Dave Bautista, Alfre Woodard, Eden Epstein, Tom Mison, Hoon Lee, Olivia Cheng, David Hewlett, and Tamara Tunie. Created by Steven Knight, the series takes place in the distant future, after a deadly virus has decimated humankind. The survivors of this tragedy have been left without their sight and must find new ways to interact, feed themselves, build shelters, and survive. Centuries later, Baba Voss (Momoa) is the Chief of the Alkenny tribe and his wife gives birth to a set of twins who, miraculously, are able to see. The queen of another tribe wants to capture Voss’ children so he must rely on his instincts and warrior skills to protect them. In season two, Baba Voss is struggling to reunite his family while protecting them as the threat of war looms between the Kingdom of Paya and the Trivantian Republic. Despite his best efforts, his wife and sighted children are pulled to the forefront of the conflict, where they come to the attention of his estranged brother, Edo Voss (Bautista), a powerful and cunning Trivantian General, whose long-simmering hatred for his brother imperils them all even further.

Will Apple TV+ cancel or renew See for season three? In this case, we already know that the series has been renewed. The second season launch has also hit new viewership highs for the streamer so, as long as Momoa wants to keep making it, this show may be around for quite a while. I’ll keep my ears open and an eye out for news, and will update this page with breaking developments. Subscribe for free alerts on See cancellation or renewal news.

What do you think? Are you glad that the See TV show has been renewed for a third season? How would you feel if Apple TV+ had cancelled this TV series, instead?