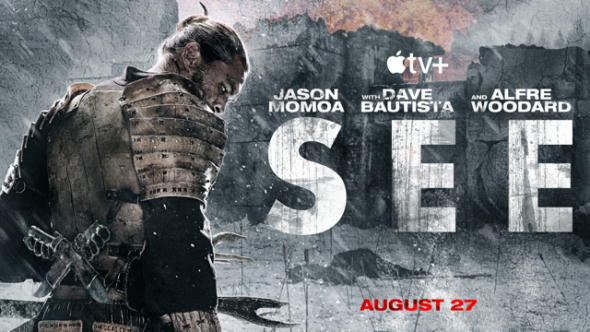 Baba Voss is returning this summer. Apple TV+ has announced that the second season of See, the post-apocalyptic drama series, will launch on Friday, August 27th. In addition, the streaming service has already renewed the show for a third season.

The first season of the See TV series stars Jason Momoa, Alfre Woodard, Yadira Guevara-Prip, Nesta Cooper, Sylvia Hoeks, Archie Madekwe, Christian Camargo, Hera Hilmar, and Mojean Aria. Created by Steven Knight, the drama takes place in the distant future, after a deadly virus has decimated humankind. The survivors of this tragedy have been left without their sight and must find new ways to interact, feed themselves, build shelters, and survive. Centuries later, Baba Voss (Momoa) is the Chief of the Alkenny tribe and his wife gives birth to a set of twins who, miraculously, are able to see. The queen of another tribe wants to capture Voss’ children so he must rely on his instincts and warrior skills to protect them.

Here’s the renewal announcement, as well as a second season teaser video, from Apple TV+:

Apple TV+ has revealed a teaser trailer for the second season of its epic post-apocalyptic series “See,” which will premiere globally on Friday, August 27 on Apple TV+, with a new episode premiering weekly, every Friday thereafter. The series also received an early renewal for a third season, with filming currently underway in Toronto, Canada.

“See” takes place in the far future when humankind has lost its sense of sight. In season two, Baba Voss is fighting to reunite his torn-apart family and get away from the war and politics that surround him, but the more he moves away, the deeper he gets sucked in, and the emergence of his nemesis brother threatens his family even more.

“See” has been a fan favorite since premiering on Apple TV+ in November 2019. The series features cast and crew who are blind or have low vision and has been honored for its representation of the visually impaired, winning the Ruderman Family Foundation Seal of Authentic Representation in 2020.

The complete first season of “See” is now streaming on Apple TV+.
Apple TV+ offers premium, compelling drama and comedy series, feature films, groundbreaking documentaries, and kids and family entertainment, and is available to watch across all your favorite screens. After its launch on November 1, 2019, Apple TV+ became the first all-original streaming service to launch around the world, and has premiered more original hits and received more award recognitions faster than any other streaming service in its debut. To date, Apple Original films, documentaries and series have been honored with 109 wins and 380 awards nominations.

About Apple TV+
Apple TV+ is available on the Apple TV app in over 100 countries and regions, on over 1 billion screens, including iPhone, iPad, Apple TV, Mac, popular smart TVs from Samsung, LG, Sony, VIZIO, TCL and others, Roku and Amazon Fire TV devices, Chromecast with Google TV, PlayStation and Xbox gaming consoles, and at tv.apple.com, for $4.99 per month with a seven-day free trial. For a limited time, customers who purchase a new iPhone, iPad, Apple TV, Mac or iPod touch can enjoy one year of Apple TV+ for free. This special offer is good for three months after the first activation of the eligible device.*

Check out our status sheets to track new TV series pickups, renewals, and cancellations. You can find lists of cancelled shows here.
What do you think? Have you watched the See TV series? Are you planning to watch season two on Apple TV+ in August?

Love SEE! Was wondering if there was going to be any more seasons saw the good news. Going to watch season one again. Fantastic that there will a season three too.

Unbelievable that all these futuristic crap/catastrophic films/movies goes so enormously well over in the USA….. Well go on with your zombies, werewolfs, Big Foots and aliens.. You are probably the most scared people on this earth..