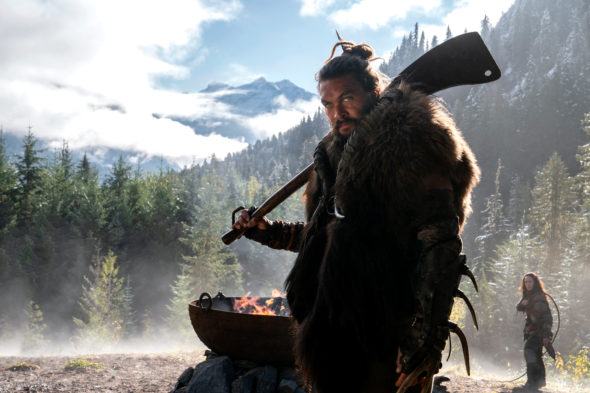 TV show description:
Created by Steven Knight, the See TV series takes place in the distant future, after a deadly virus has decimated humankind. The survivors of this tragedy have been left without their sight and must find new ways to interact, feed themselves, build shelters, and survive.

Centuries later, warrior Baba Voss (Momoa) is the Chief of the Alkenny tribe. His wife Maghra (Hilmar) is a stranger to the Alkenny tribe and gives birth to a set of twins. To the amazement of the tribe, the twins are able to see. Now in their teens, they are careful Kofun (Madekwe) and rebellious Haniwa (Cooper).

Queen Kane (Hoeks), the ruler of the Payan tribe, lives in one of the only places that still has electricity. In a world where sight is considered a forbidden heresy, she tasks Witchfinder General Christian Camargo (Jun) and her tribe with capturing the children.

Voss is forced to rely on his instincts to protect the twins and must rally fellow tribes to take down the queen and her tyrannical cult. His allies include Paris (Woodard), a midwife and spiritual leader to the Alkenny tribe, and Bow Lion (Guevara-Prip), a stealthy female warrior.

What do you think? Do you like the See TV show on Apple TV+? Do you think it should be ending or renewed for a fourth season?

renew. its a good story

Renew. Shows like this never stay around long enough. It is a very entertaining show. The ratings only show some of the people watching it. Change the way ya rate the shows , while yall at it. Lol . Wish there were more shows like this out here that last more than 1 season. Like frontier , jason was in that show too, i loved it, that stopped too. But yet a dinggy show like the living dead or something (zombies) is still up and running ewwww , cant stand that one. Again renew , ok. Please. Pretty please. Have… Read more »

Best show since Game of Thrones . ABSOLUTELY the best anywhere on TV. Love it, love it love it…

no doubt brother, i was lil bit scared after theres no ep uploaded since ep8 XD

I had been watching clips on youtube and thought wow. I got apple tv specifically to see this show. I told a bunch of people at work about it and 2 people got apple tv to watch it. Then came ted lasso. Great series as well. Keep it up apple tv